“Find ways of sharing the land, of achieving dignity without eradicating the other”- Naomi Chazon

At the improving myself end of my life, I return home from a trauma stage: telling a story who dealt with an oppressed environment in the hearing world. The majority of the world: hearing. It makes Deaf community built into a minority gambling for human struggle and painful journey.

To the survivors of oppression, those Deaf valiant souls who fought for freedom their whole lives long and never lived to taste its pursuit of happiness; To learn awareness about Deaf returnees, who lived in this strange and cruel land, yet, dreamed more safe without ignorance.

Will Gallaudet University no longer safe because of bullying policies and social values? Where was I shut out of my trauma wiped from my memories of pain for 32 years and of my accomplishments to turn my life around and dealt with hate-mongers?

In the personal tragedy of what it has happened to me, had been damaged to be enfolded and left to be a scapegoat at will in the eyes of ASL/Deaf Studies, whether our traumas can ever truly be overcome. The answers it offers are denial, deeply rooted in culture of fear, and empty my heart out. Truly broken. It is what it is called siege mentality. Us versus them rhetoric about Deaf returnees.

It is very radicalized—for example, oppressors “police” Deaf returnees, there are expectations that a person is an oppressor. They are considered flash points. If oppressing Deaf returnees on the campus of Gallaudet, what do you call it?

It is a Superman Syndrome. Oppressors are expected to SAVE THE DAY and do everything to everyone. Anti-hate mentality but when oppressors are in trouble and they need the idea of the dual relationships. It is senselessness of bullying. The problems with this type of policing—it is a masculine model, and old school stigma follow and lack of awareness is a big problem.

Let’s exacerbating this idea. Amount of awareness: 100% of educating themselves about Deaf returnees “paid dues to the society”, during the day, the “invisible oppression” and is not regulated, do not have to go by the books, but at night they are regular people by the books.

More about 10,000 Deaf inmates in the United States are invisible. When one let out of prison, only to find that landing a higher education at Gallaudet University is near impossible. In fact, they remain unemployed—often because of the stigma that they carry and concerns over what kind of higher education they would prove to be. It means the awareness of Deaf returnees is three times more invisible and marginalized.

The rhetoric of supremacism. What is supremacism? It “is an ideology of domination and superiority: it states that a particular class of people is superior to others, and that it should dominate, control, and subjugate others, or is entitled to do it.” 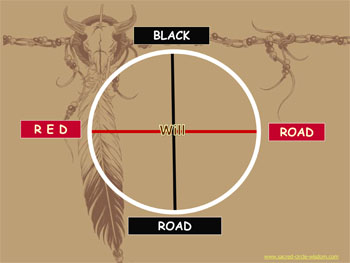 When I took American Indian Literature for one of my undergraduate requirements, I was asked to read a book called The Lakota Way: Stories and Lessons for Living:

“We Lakota believe that the roads in life, but that there are two that are most important. The Red Road and the Black Road. They represent the two perspectives to every situation, the two sides of every person, the two choices we frequently face in life.

The Red Road is the good way, the good side, and the right choice. It is a narrow road fraught with dangers and obstacles is extremely difficult to travel.

The Black Road is the bad way, the bad side, the wrong choice. It is wide and very easy to travel. The Red Road and the Black Road appear in many of our stories, not as roads but as the personifications of right and wrong, good and bad, light and dark.”

That is something we need to think about. Can Deaf returnees be forgiven and give a second chance? The activity of entering or “invading” the awareness on the part of Deaf returnees is clearly one of struggling subversion. Intended by their visible presence in this clearly showed Gallaudet mecca is limiting between the allowable spaces for Deaf returnee’s search for healing and the rest of Gallaudet campus.

Left unchallenged in such an action, however, are the hardest ways, besides the awareness about Deaf returnees, in which Deaf returnees feel alienated and excluded from Deaf space.

In the higher learning, it was the contention of oppressors to continue combat this stigma must be regarded as the same source of power that denied Deaf returnees access to higher education. Bullying—long tolerated as just part of growing up—finally has been recognized as a sociological problem.

In 1999, District of Columbia enacted anti-bullying legislation. In addition, research on the causes, consequences, and prevention of bullying has not enough discussed at Gallaudet University. However, major ignorance still exists in the understanding of bullying that could prevent the effects of bullying Deaf returnees. The form of social isolation is another sociological problem. With the right training, Deaf returnees who’ve been returned to the society thrive to hold hunger for higher education even more than your regular American citizen.

Higher education plays an important role in their lives. To empower the strategy of unity through democracy—and to teach them is the most peaceful thing. The spirit of peace and democracy that lacks the Gallaudet community-Deaf returnee agreement is gone, and there is no second chance for how to reverse it and how to cope with it.

Professors regarded as, “Person who professes being usually an expert in arts or sciences, a teacher of the highest rank.” Harper, Douglas, “Professor.” Online Etymology Dictionary. Retrieved 2007-07-28.

Text defines “social movements” as collective attempts to bring about change….” Nothing. They originate OUTSIDE the established political system. Let’s emphasize on interlocking systems of oppression—however that is being conceptualized to it. Perhaps it seems surprising because the society have class, power and other issues to contend with. Deaf returnees are less likely to say that the society needs a movement because they continue to be oppressed.

All for all, Deaf returnees have constitutional right to seek higher education at Gallaudet and change their lives around to make them better. 8th Amendment and 9th to the United States Constitution respectively: Bails, fines, and punishments—“nor cruel and unusual punishments inflicted.”

What is something really important about the relationship between Deaf returnees and Deaf community that we have not discussed in higher learning, and why is it important? Can we find ways of sharing awareness, of achieving dignity without oppressing Deaf returnees at Gallaudet University?