I am glad to see H3 World TV, a Deaf signing centric news, to do a story about Leonardo da Vinci on December 18, 2019, under SportsDeaf Winter: Italy-Day 6. You should watch the video with the YouTube link below.

The statue of Leonardo is beautiful. The story was about Leonardo da Vinci holds a high and true loyalty with Deaf people. The definition of truth is being loyal, something that is real, factually correct, accurate or provable. Leonardo knew that Deaf people’s eyes were masterminding an invisible gate. Leonardo da Vinci was one of the greatest thinkers in humankind.

September 2013: My brother and I grabbed this opportunity to visit Leonardo da Vinci’s Codex on the Flight of Birds at National Air & Space Museum inside Wright Brothers Gallery. 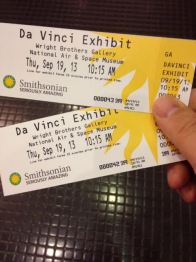 October 2015: I was honoured to give a lecture: Composition in Values: The Art and Deaf Studies of Leonardo da Vinci at Gallaudet University where we discussed how much his work was influenced by Deaf presence.

He knew that Deaf presence would become a creative biography for one of the greatest Renaissance artists, thinkers, and inventors, to challenge the status quo of culture and history how Deaf people would surround around Leonardo da Vinci’s presence to recognize the beauty of human nature.

The quote by Leonardo: “The human being, creature of eyes, needs the image.”

The book, Leonardo da Vinci by Walter Isaacson, the New York Times had rated this book as the national bestseller for a good run and I enjoyed reading that book along with other books like Math and the Mona Lisa and How to Think Like Leonardo Da Vinci. His greatness influenced critical thinkers around the world among us. It is forever grateful. Although, it is too bad that Walter Isaacson did not write about how important Deaf people were in Leonardo’s life.

In 2004, while taking an Art History class for a community college, I grabbed an opportunity to write 15-page essay about Leonardo da Vinci’s artworks, and learned that Leonardo had greatest students, one of them happened to be Deaf for one of the masterpieces, The Virgin of the Rocks, known as Madonna of the Rocks in which Mary’s right hand is seen to represent the manual letter L; the angel’s hand is the letter D; and the baby Jesus’s hand, the letter V.

Leonardo believed in his two Deaf apprentices to use the eyes because he knew that their eyes are beyond powerful than nothing can measure the perception so powerful that cannot be overlooked.

At the same time, Leonardo writes in his personal notebooks: “Do you not see how many and how varied the actions which are performed by men alone are?”

For Deaf people, seeing something understanding.

The attachment of Leonardo da Vinci’s painting–Leonardo, the Renaissance painter, had observed sign language by one of his students, Ambrosio de Predis, the son of Christoforo de Predis (1440-1486), a Deaf artist from Milan. Leonardo was so marvelled that he painted his initials by using the letters from the manual alphabet, LDV–see the circled hands in this portrait to honour his own experiences with sign language and his collaboration with the users of sign language.

This work of Leonardo da Vinci is indeed one of the most amazing stories ever told.

Not only that, Leonardo da Vinci being the first Renaissance artist who imitates sign language in one of his paintings, and his influence on Raphael is also realized in his painting, School of Athens, in which sign language is used and learn from the expressivity of the Deaf.

As I learned about the School of Athens in the same art history class above and learned the Golden Ratio rule, I have been inspired to do the more serious reading and research how much Deaf people contributed to the world, especially during Leonardo da Vinci’s time only years later. How come the art world does not discuss enough how much Deaf people contributed to Leonardo da Vinci’s works that will never be at that moment?

What was the intent beneath the inconsistencies in the character of Deaf people? What would be Leonardo da Vinci’s motivation to simply reveal his own thoughts through the PEOPLE of the EYE? Respect? Stopping the practice of satire, a mockery of people of the eye?

At that very moment, Leonardo knew that Deaf people had been the walking, signing, living, and breathing definition of a character. It is indeed a powerful voice of reason. 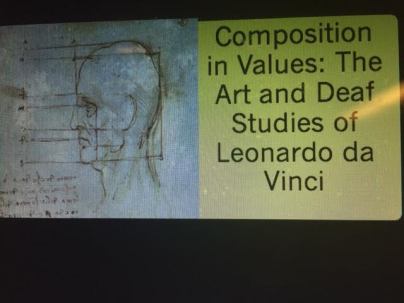