A long time ago in galaxy far, far away…

There is a secret document that has been sealed inside Gallaudet University so deep enough to bury the hatchet—it is like the Federal Bank of New York on the behalf of Federal Reserve System. They hold the gold in there—they act as the guardian and custodian of the gold on behalf of account holders, which include to U.S. government—official organizations.

Gallaudet University is a property of U.S. government and home to many official organizations. Therefore, Gallaudet is home to Alexander Graham Bell Association, an official organization. AGB acts as the guardian and custodian of the Deaf oppression. Have you ever seen a Gallaudet president talk about Racism front of the world before our eyes before? How many Gallaudet presidents combined in total before Bobbi Cordano? I am not talking about text messages, but I am talking about a real-time video—the mother of Truth. That is the first time ever what a Gallaudet-elect president said that. That is history in the making, folks!

This is but one truly social problem, and that is educational ignorance. Whether or not the world has three dimensions, whether the mind has nine or 12 categories, games are to be played. Racism does not including stories, one must first answer! Gallaudet University was built in 1864 for Deaf people first like Tatoonie with the picture above—where it had begun for Deaf people first. Same concept.

Alexander Graham Bell once said, “When one door closes another door opens, but we so often look so long and so regretfully upon the closed door, that we do not see the ones which open for us.” Have you ever seen a picture of Alexander Graham Bell and a Black Deaf student together anywhere? No pictures can be found. It is important to know that Bell did write a memo (letter-alike) to Francis Galton in Britain who coined Eugenics informing him that AGB follows Galton’s philosophy then becomes a honorary president of the Second International Congress of Eugenics a year before his death. People look up to AGB as Jedi of Deaf people—the problem, Jedi was supposed to be good people. 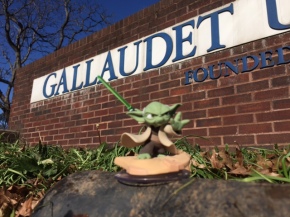 Darth Vader was a Jedi before the Dark Side took over his life—and AGB went into Dark Side and fooled many people including Deaf people.

Eugenics influences Racism—a learned behavior in higher education. Galton then writes a letter in return on his paper, “Hereditary Deafness” on his review of Bell’s Upon the formation of a deaf variety of the human race in a 1885 magazine—Review in Nature, Vol: 31, Pages 269-70. The opening paragraph:

The startling title of Mr. Graham Bell’s admirable memoir is fully justified by its contents.

Finally, in late 2015, President-elect Bobbi Cordano shares her greatest concerns after being invited to be part of town hall by Black Student Union listening to stories about oppression, internalized oppression at best. Bobbi would like to stop Racism and systematic discrimination as long as Alexander Graham Bell’s name is out of the Gallaudet campus. AGB’s systematic discrimination practices Audism, the favorite cousin of Racism. The quote by AGB makes a perfect example why Gallaudet has ignored Racism for so long by allowing that happening inside the door being closed and opens to Racism any time they welcome so regretfully upon the door that white supremacy still practices at Gallaudet. Is that why they do not want us to see the ones, which open for us?

Now I can broach the notion of intellectual oppression at Gallaudet University. There is a real change. It has already felt what solution might be given. At this point the problem is reversed. It was previously questioned of finding out whether or not Racism appears a problem. It now becomes clear, on the contrary, that Racism is or not. Watching the campus unrest at Gallaudet University, a particular fact, is acknowledging it fully. Now, no one will live in this fact, not recognizing it to be important, unless AGB goes away.

No kidding! His name is Oliver Heaviside, an electrical engineer, mathematician, and physicist from 1850s from England. He invented several mathematical techniques to seek for the solution of differential equations and coined Electromagnetic eight terms. Deaf people do not need to suffer anymore and throw Jedi Bell into the Death Star for once and all. Bell is a death star to Deaf people’s Star Wars. Darth Vader would fry Bell like Vader did to Palpatine, also known as Darth Sidious, who planned to overthrow the Republic and the Jedi Order from with.

Being an ally to people of color in the struggle to end racism is one of the most important things that Gallaudet University needs to do that. Can there at least healthy way to be an ally? Racism needs to be overthrown out of Gallaudet University and the Jedi Order of Alexander Graham Bell. Why return again and again?

A wise Jedi once warned, “Fear is the path to the dark side. Fear leads to anger. Anger leads to hate. Hate leads to suffering.”

Hate crimes and speech does exist on the campus. A lot of Deaf people had been suffering.  Thank you, Master Yoda! That would become of healthy Gallaudet!

May the Force be with you! 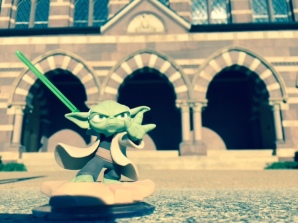