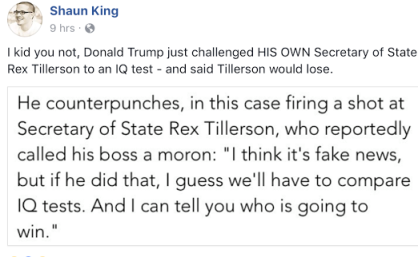 Uh…..how will Trump win? Check out some of Trump’s most stupidest things he said so far. What would the IQ test results for Trump? The results would be shocking! No way Trump could make it into Mensa, the high IQ society with high caliber goals: “an international society whose only qualification for membership is a score in the top 2 percent of the general population on a standardized intelligence test” I laugh at Trump. He would erase everything including Obama’s achievements out of the history books. His stupidity is what profoundly impacts by erasing the quality of life in America. I support 25th Amendment to remove Trump as United States of America President.

“Dwyane Wade’s cousin was just shot and killed walking her baby in Chicago. Just what I have been saying. African-Americans will VOTE TRUMP!” –Donald Trump, tweeting about the tragic death of Nykea Aldridge, cousin of NBA star Dwyane Wade, and making it all about him (Aug. 27, 2016)

“I always wanted to get the Purple Heart. This was much easier.” –Donald Trump, on receiving a Purple Heart as a gift from a retired lieutenant colonel and supporter (August 2, 2016)

“I think I am, actually humble. I think I’m much more humble than you would understand.” –Donald Trump, 60 Minutes interview, July 17, 2016

“I could stand in the middle of Fifth Avenue and shoot somebody, and I wouldn’t lose any voters, okay? It’s, like, incredible.” –Donald Trump, speaking at a rally in Sioux Center, Iowa as the audience laughed, January 23, 2016