When Carl Schroeder was dying, he shared an invaluable story about Deaf President Now (DPN). There were a lot of stories to share though. He told a story that when he visited John Yeh and learned that Yeh heavily appropriated DPN. I am talking about spending a lot of money before it became materialized. Yeh is a good man.

I was told about this story how I. King Jordan (IKJ) and Paul Kelly knew each other before DPN. Paul Kelly encouraged IKJ to apply and coached him how to get this job. Of course, Jordan awarded Kelly by giving him a promotion to Vice President of Administration and Business. That is where Kelly got his hands by controlling Gallaudet today and tomorrow. 30 years ago Carl said no to IKJ and he became an ugly duckling and he said that he is comfortable with it because he knows that he is in literature and pictures, too.

Carl had a huge clash with one of the Seven Ducks and Carl felt his hatred. It was not even pretty. One of the Seven Ducks spewed hatred and racist language towards Carl and the other Duck supported that racist Duck. Through Carl’s “campaign” before and in the DPN demonstration, Carl insisted that Gallaudet do a new search. That is where Carl was made even more ugly duckling. They picked IKJ and thought he would leave in few years. However, he overstayed his welcome and continued to entertain this welcome.

Anyone ever remember that in 1991, Jordan shut down bilingual education and ASL? That was only three years as Gallaudet University President. Remember, Jordan was a huge Sim-Com user and still is today. Carl was right and tried to warn the Seven Ducks that Jordan was not the right selection. He knew. He knew. He knew. Yet regardless this attitude, anyone who finds himself in a position of Gallaudet University needs to develop a Deaf-centered environment if he means to lead the University well that was supposed to be ASL-centered.

So much for Harkin’s speech in 1988 at Gallaudet few months after DPN—“The inauguration of President Jordan is the beginning of a new era for deaf people around the world. No more will deaf people tolerate the paternalism and the charity of those who seek to control their future. You ARE the masters of your own destiny.” 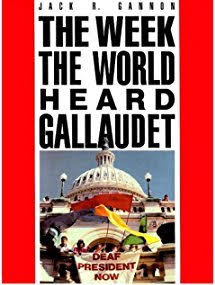 Ten years later after DPN, one Deaf guy asked a question, “Why not Deaf President Now should be a national holiday?” The whole story needs to be filled in from the start. As long as Gallaudet emphasizes diversity, it will take years before a mental unity will merge unless I am grossly mistaken. “Div”—is in Latin meaning spilt. If it is not unity, uni-means oneness. It was the faculty senate that is the most powerful voice. It is the same truth for all other colleges and universities and we need to be aware about this very much. It is extremely important!

Carl was an “unseen” hero in DPN. He was very much involved with DPN meetings and all. The only regret as in 2013, one person asked a question for Ben Jarashow’s lecture: The 7 Ducks: Behind the DPN Movement if any 7 Ducks had any regrets. A Duck threw the most ugliest and racist language in his face and other Duck supported that Duck. Yes, that duck had a HUGE clash with Carl. No regrets? Tsk tsk. Racism is a social disease.

Fast forward. 2006. There was second protest—see what happens? Carl knew that IKJ was not the right selection. Carl became a scapegoat. The administration did nothing to minimize their anger and there was an insidious plan at Gallaudet University to remove him from his professoriate.

Of all the DPN duckies, Carl was considered crazy and radical. The reason he was very disappointed with the appointment of IKJ at the helm of Gallaudet because IKJ switched his support between the Board of Trustees and the protest. Carl was the one who inspired students with his talk on the night before the students and other people marched to the Mayflower Hotel.

The only reason he became blackballed because he said “Fuck Hearing” (So what! I bet there are a lot of Deaf people who would say the same thing) and the administration made his life hell.

Their lives live the most extraordinarily satisfying lives in a period that has witnessed the 1988 DPN; a world in which Deaf people have been “seen” and in which hundreds of millions of Deaf people around the world live in conditions of oppression and hopelessness. It demands change, especially in academia. Most importantly, students could become new meaning-makers. Carl told me many stories about DPN—and he approved of student protest because it was meaningful and necessary. His or her battle harmed no one. Take notice. Be aware. Appreciate the students.

Most recently about a week ago, I learned that one of DPN original Student leaders was asking for names to be part of DPN 30th anniversary—and the majority of people are white. How come there are not enough Deaf people of color? Why are they shunned out of the picture?

Carl’s passionate will never  forgotten. He was very much part of DPN Movement. Shame on two Ducks for encouraging Racism. They were the most unqualified, misleading, uninformed vile excuse for humanity. I support Carl all the way. I do not support DPN as national holiday because of racism and it needs to be addressed sooner or later. I do not appreciate hatred.

The worst part was that when Carl passed away and had asked me to be person of charge for his memorial service at Ole Jim (Alumni House) in April 2014. That day, there were few original Ducks did not even bother to attend Carl’s memorial service and pay respect instead of watching a NFL tryout for a Deaf football player at Gallaudet on the same day.  Laughing, hand-shaking, debating about sports. It tells a lot. Selfish? Guilt? Who knows?

After collecting and reading archived letters from Gallaudet University about EPHPHATHA in my previous blog with 12 different posts, (I could not upload all the images at once, so I had to split different posts and I apologize about that) it is still blurry and very limited information. We the Deaf need to report Audism, language aversion, our language, and our culture. Removing EPHPHATHA will design to empower the Deaf community to prevent these religious “bad omen” or “witch hunt” to heal and minimize the false beliefs and negative feelings that people have about the Deaf. What does Deaf people feel like when they drive by, walk by nor walk around Gallaudet and see EPHPHATHA playing behind the fence? Deaf people on display?

EPHPHATHA is driving Deaf people out of their state of being Deaf and only sees the world of action to make sure that Deaf people do not think and desire their own culture because EPHPHATHA is an everyday influence on Gallaudet’s seal which has a huge power-playing and that is why Deaf people do not talk much about it. Talking about EPHPHATHA is an opportunity for us to learn about ourselves as Deaf people and I think it is very important to know that we need to reclaim our lives back in good conscience. Not only that the term also fragmentize the Deaf community into quattuordecillion pieces.

Deaf people must fight against the religious belief to heal us in order to preserve our language and our culture for future generations. Gallaudet needs to know that every Deaf citizen’s rights to be rooted in the free pursuit of happiness. “Be Thou Opened” has nothing to do with the opening of mind, knowledge, education, learning, whatever, but we must look at the very ORIGIN of the term: healing ears and speech. That is very much hidden message. Every English word always has the ORIGIN meaning of it. We must remember to recognize the origin meaning first. The term itself taught the university how NOT to tolerate diversity.

From one of my favorite books, Cultural Studies in the Future Tense by Lawrence Grossberg wrote “Cultural Studies describes how people’s everyday lives are articulated by and with culture. It investigates how people are empowered and disempowered by the particular structures and forces that organize their everyday lives in contradictory ways and their (everyday) lives are themselves articulated to and by the trajectories of economic, social, cultural, and political power..This is, seeks to understand not only the organization of power, but also the possibilities of survival, struggle, resistance, and change. It takes contestation for granted, not as a reality in every instance, but as an assumption necessary for the existence of critical work, political opposition, and even historical change.”

It is time to make a substantive democracy and work for real change. EPHPHATHA is divided. We, the Deaf people, are united. It is pretty much evident that Audists are holding large claims on Gallaudet’s property, including a fair amount of government debt. President Hurwitz is not the president we need. He is not doing his job. We have to let him ago. We need to get back in shape. It is pretty easy choice when you compare two circus clowns, I. King Jordan and Alan Hurwitz that lie at the drop of their teeth every time they speak, worship only the greed of EPHPHATHA and never tell us what their plans who allows the obstruction of Audism on the Gallaudet seal. Both are members of Alexander Graham Bell Association. No character and heart for the Deaf community at all.

It is time to propose to the Gallaudet administration that it is enough to play mind games with Deaf people’s emotions. We need to get ourselves involved in this hidden term and remove it. Our activism needs to make a loud statement and let them know that our conviction that EPHPHATHA is wrong. Why does Gallaudet fail Deaf people from not succeeding their hearing abilities? Deaf people should not been criticized and their biggest liabilities are to be succeed and get a fair education from Gallaudet without the term wringing their necks around. EPHPHATHA does not contribute to the cultural diversity of this Deaf community and makes us invisible in this world. Removing the term off the seal will bring Deaf people a place of belonging, but if the term is still there, then Deaf people will deny their sense of belonging. Simple.