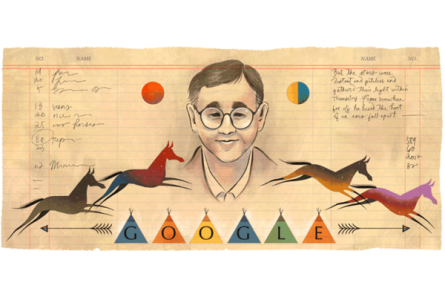 Today is James Welch’s birthday—a famous Native American writer whom he passed away in 2003. When I looked up Google, there was a Doodle of James Welch honoring his contributions. I did not realize today was his birthday—so, I am writing a post to honor him. When I signed up for American Indian Literature course as a student, I really enjoyed his book, Fools Crow, it really hit me hard a lot what Native American literature was about. What impressed me the most is that he was a founding author of the Native American Renaissance—I remember my professor was talking a lot about Mr. Welch. He had asked all of us to read his books as required and write no more than 15 pages essay. 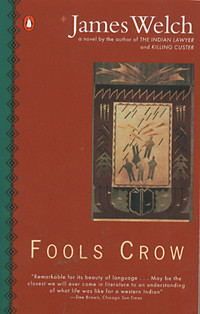 I was really intrigued how Welch, in his book, Fools Crow, was able to show the tension in traditional values of the Blackfeet Indians during time of cultural and historical change. In the beginning of the book, younger Pikuni males (includling White Man’s Dog, who later becomes Fools Crow) are planning to embark upon a horse raid. Gaining horses for the tribe is viewed favorably and earns the Pikuni respect and a level of responsibility within their group. However, the younger Pikuni in the novel seem to be more focused on the personal glory attained in the plundering of horses from the Crow Indians.

I loved how Welch illustrates the life of the Pukini through storytelling. In this sense, he is preserving written tradition as important to Native American culture and a theme in Native American writing. For instance, rather than just describe the Sun Dance ritual, he describes Fools Crow’s experience of transcendence as he dances:

Fools Crow listened to the faraway rumble of Thunder Chief and felt his step becomes lighter. He felt in his heart, in the rhythm of the drum, a peculiar kind of happiness—a happiness that sleeps with sadness. And the feeling made his head light and he was removed from the others, dancing alone, singing a song that had to do with his life in this world, and in that other world he visited from his vision…. [Fools Crow, page 390]

My best time in that course I took, the book I was also required to read, The Jailing of Cecelia Capture written by Janet Campbell Hale, I decided to write both books in my final essay, Cecilia Capture and the Welch’s Narrator: An Examination of Two Cultures in a Search for Identity. if it was not for James Welch, it would not have published. Thank you, Mr. James Welch for the characters of Native Americans come to terms with its challenges, and continuing survival, with humor, and perhaps a sad recognition that they must continuously face and sometimes capitalize on derogatory stereotypes to ensure their survival.

Be sure to celebrate Native American Heritage Month! 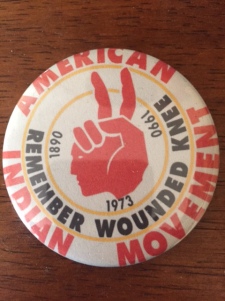 The Pin I Am Proudly to Hold!