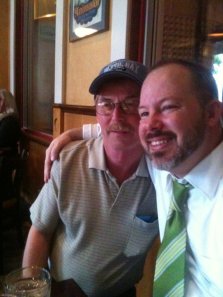 “We tell the public which way the cat is jumping. The public will take care of the cat”– Arthur Hays Sulzberger

Being Deaf is personal for me and I believe that it is like my right to believe in any way. The problem is when the media and politics got into my father’s mind.

I did not know about Milan Resolution 1880 banning sign language until three years ago and it took me to realize that from the time we all were being indoctrinated with Oralism as well as Cochlear Implant (CI) today when we did not know why they imposed the Milan 1880 resolution.

Eight years ago, for example, my father asked me during our lunch outing at famous Carol’s Café, and we were about to order our food from the menu when my father said to me in some of “home” sign language that he had found some good news.  He heard from other people as well as saw the television advertisement that cochlear implants (CI) is the best tool for me to hear. He thought that if I get CI it would make me happy, get a job, and even to hear all the things I could ever imagine. He thought it was great.

By looking at my father’s face with high hopes, I realized that my being Deaf is not good enough for him.  I was 30 years old that time. I had been Deaf all my life since I was a baby. I was devastated and decided to walk away from the table and unlocked my bicycle so I could go home alone.  It was raining that day.

My father was puzzled why I left all of sudden. He tried to call me several times that day but I did not pick it up. I did not talk to him for a couple of days. I realized that it was one of my earliest stages of understanding the dynamics of Deafhood.

We need to bring stronger ethics and philosophy back into our Deaf minds and, especially at an early age.  We the Deaf need to stop negative media. Do not let negative media degrade us by offering us the Deaf those Cochlear Implants  (CI) because they are filled with the false hopes.

Perhaps we should re-frame the question: How can society protect Deaf children from being implanted?

This dangerous “CI myth” is what nearly all the media are selling false hopes. The CI myth is also pushed by media sources that has fed my father into thinking that CI is equated to “happiness,” “job” and “information access.” I did not blame my father for it. I am blaming the social media that exploited my father into believing so.

It has concerned me that the media continues to IGNORE the facts and follow our emotions when it comes to public policy. We the Deaf are people, too, for two things: the state of being Deaf is human right and using American Sign Language (ASL) is our legal right, too. We have the hard facts because we are the breeds of Deaf blood. Why should the public policy by getting cochlear implant be based on? Should it be based on anecdotal experiences?

When Deaf children are being persecuted as in those caught up in Alexander Graham Bell Association of the Deaf (AGBAD)’s stupid policy, which is the first thing that they want to do by eliminating being Deaf right off the face of the Earth, making sure Deaf children are breeding and acting like hearing people. Deaf people do have human rights and basic legal rights, but AGBAD breeds the myths and fictions which had driven my father to think that CI will bring me happiness. It is a legal train wreck.

We the Deaf need to challenge those AGBAD politicians who have only their careers to watch out not for the public good.

Dad, it is not your fault! The media took our love away! They want you to love CI. You might be a turd, but damn it, I do love you, Dad!