Folger Shakespeare Library, home of the world’s largest Shakespeare collection in Washington, D.C. from my iPhone. Hint: They do provide ASL interpreters!

Today I am in mood to write about William Shakespeare. He was an icon in English departments worldwide. In my old town, I would ride my old Schwinn road bicycle to attend summer play given by the company that also provides ASL interpreters. It was a blast! I grow to appreciate his writing by taking couple of courses about Shakespeare. 400 years ago, he passed away on his birthday, April 23rd. To begin off with Renaissance Literature, a book I was reading loaded with sonnets, Shakespeare writes in Sonnet XXIX (29):

When in disgrace with fortune and men’s eyes

I all alone beweep my outcast state,

And trouble deaf heaven with my bootless cries,

And look upon myself, and curse my fate,

Wishing me like to one more rich in hope,

Desiring this man’s art, and that man’s scope,

With what I most enjoy contented least;

Yet in these thoughts my self almost despising,

Haply I think on thee, and then my state,

Like to the lark at break of day arising

For thy sweet love remembered such wealth brings

That then I scorn to change my state with kings.

This sonnet has been always on my mind for a while and it is challenging to analyze what Shakespeare really meant by that. There were so many interpretations in there— Could Shakespeare possibly write this about Deaf people he had seen what they had been going through? There is a valid reason I would think of this because with the first sentence, “when in disgrace with fortune and men’s eyes”—that carries a picture of subject into the picture. “I all alone beweep my outcast state”—treat Deaf people within outcast state and weep alone.

Then why would Shakespeare have said, “And trouble deaf heaven with my bootless cries”. I have a hunch feeling that the sonnet was about Deaf people for some reason. As is well known but quickly forgotten, this sonnet might make history. Who knows that Shakespeare was a fierce supporter of Deaf people? Shakespeare became both iconic and historic.

With collective support in English literature which earn him a legend. Again, this sonnet might as well as recognizing marginalized perspectives of Deaf people to light is therefore a revolutionary act of some importance. It can subvert dominant understandings, it might inspire us to raise our voice and support Shakespeare’s sonnet XXIX, and it also forces us to rewrite old histories to include or at least respond to the vision of social oppression today in media.

What if this sonnet had the effect of creating a series of false images about Deaf people? The most important being that the dismissal ignorant in that time period meant the complete collapse of Deaf people. Shakespeare understood the false images of Deaf people that they attempt to had triumph against great odds of the hearing oppressors and had succeed in bringing about linguistic and cultural claims that being Deaf belongs in higher education. It may or not whether it is knock-on effect.

In fact, Deaf people who appreciate Shakespeare’s writing, they are looking out for the ripple effect of the historical sonnet. Personal, social, and cultural rationalizations concerning ourselves as Deaf people and the world around us are Shakespeare’s sonnet XXIX that have to be broken. Again, this sonnet is the greatest mystery.

This is only free-writing. It was fun to do something like this even if I may be incorrect about this sonnet from Shakespeare scholars. 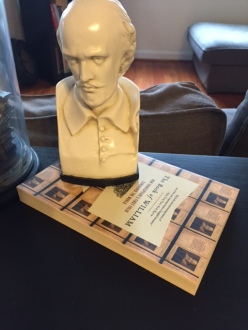