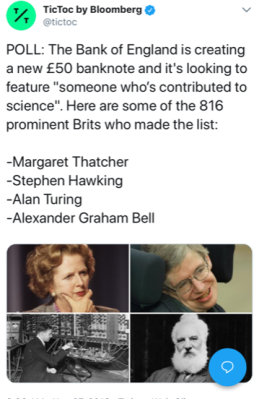 The news appeared on November 27, 2018: So, the Bank of England has been considering Alexander Graham Bell’s face on paper money for his contribution to “science”—someone who was two-faced gaslighter as I found interesting the definition of “gaslighter”—When a gaslighter thinks that they are not the problem and everyone else is, this is called having an ego-syntonic personality. (Jan 30, 2017: psychology today.com)

Alexander Graham Bell thinks he is not the problem, but thinks Deaf people are the problem. He is the poster child of gaslighter. “Science”—from the dictionary: the intellectual and practical activity encompassing the systematic study of the structure and behavior of the physical and natural world through observation and experiment.

Whether Bank of England considered his name, because of his idea to create telephone that changed the face of humans, but there is another hidden science what Alexander Graham Bell has contributed to use Deaf children as lab experiment. It was a tradition of genocide.

If the Bank of England has chosen Alexander Graham Bell as the top choice, people who would carry paper money with his face around in the pocket, wallet, coat, purse, whatever it is, to remind those people that it is OK to allow Deaf-hating ideologist, with the ultimate goal of eradicating Deaf people in the name of hate crime is the greatest threat to Deaf people’s democracy.

We need to remind ourselves two quotes by the world’s leading eugenicist of the Deaf people:

“The main object of the education of the deaf is to fit them to live in the world of a hearing-speaking people.”

Power hunger or power struggle? As the Deaf community enter the global phrase of being under-privileged, it becomes obvious that the money is the root of evil. The paper money of AGBell’s face oppressing of the most invisible minority are dangerous, requiring a huge commitment of cultural appropriation to accomplish their renewal and rebuilt AGBell’s fame.

The power of money is complicated by the cycle of oppression constitute consciousness of Deaf people whose lives is limited—denying them the passion. Unfortunately, there is no unique passion that gives the Deaf community break from money-free oppression. Every day, Deaf people are being targeted for big money and character assassination.

Deaf people’s lives are in the danger of cultural appropriation, and that would be undesirable for everyone. It is necessary to fight against hatred practices by Alexander Graham Bell’s ideology that is infectious enough to warrant a protest by members of Deaf community. In this case, hatred will survive because of survival itself and not only because it has been influenced by stories. The goal of creating activism is not to allow Alexander Graham Bell’s face on the paper money, the first kind in the world, and challenge the practices of hate speech.

Truth itself can be revolutionary topic in a society steeped in hearing privileges that makes necessary to take respect away from Deaf people. The society we live in, Alexander Graham Bell is pushing for Surdophobia culture, ‘the fear of Deaf people’ not just because it was deemed cultural hegemony in the eyes of Deaf people but also the ignorance and lack of cultural respect cannot be “un-done”—Deaf people are human beings—they are not human doings.

The awareness of Deaf culture has been grossly neglected in the society, and it is deteriorating. It has nothing to do with right or left really, but the powerful knowledge about Deaf people has skewed for profit and not for facts.

The final question, Is the face of Alexander Graham Bell on paper money, need any more arrogance, the leadership that exploits Deaf children with the lies as they make “deficit-thinking” decisions on those facts and not only on the emotionalized, oppressive of Deaf community and the misinformed public sentiment? Will Bank of England print this image on banknote (paper money bill) like this one below? 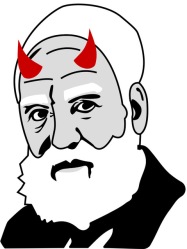 As of March 2nd, 2017–The event: Islamophobia Within Deaf Community held at Gallaudet University, the world’s only academia hub for the Deaf—I refuse to add “Hard of Hearing” for couple of reasons. The stories are important to be seen. All the panelists are storytellers.

“The purpose of a storyteller is not to tell you how to think, but to give you questions to think upon.”- Brandon Sanderson, The Way of Kings

The interpreter is a disgrace to the interpreting community and RID (Registry of Interpreters for Deaf). That statement is hate speech. We let you know that we are fighting back with any efforts to stop hate speech.

Interpreters work for Deaf have been around for many years before RID was founded in 1964—the interpreters have been living in the world of oppression to heal the Deaf community in any kind of form. Are the interpreters necessary in order to acknowledge the existence of discrimination? Why not? The question calls for a clear answer, it does propose whether there is a hate speech against people of color or Muslim in this matter and we need to challenge hate speech in interpreting community.

The interpreter needs to be terminated—no longer represents RID and Deaf community. RID needs to be become more committed to higher education in support of intellectual freedom, the search for social justice, respect for differences, and a belief in collective responsibility for the welfare of all the Deaf people. We also do not need deficit thinkers.

Saying I will not work for terrorists—that is not an important role to play in public. The interpreter does not set a good example for campus unity and pride by means of intersectionalilty to promote its own propaganda. Hate speech is not acceptable.

Are you with me? 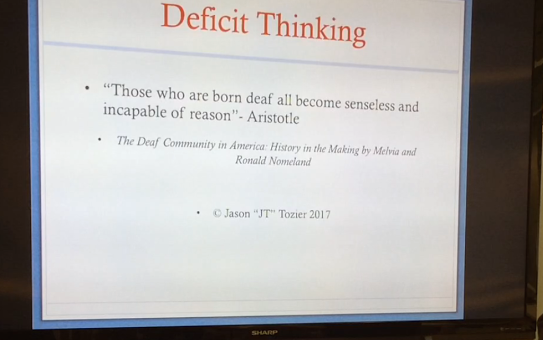 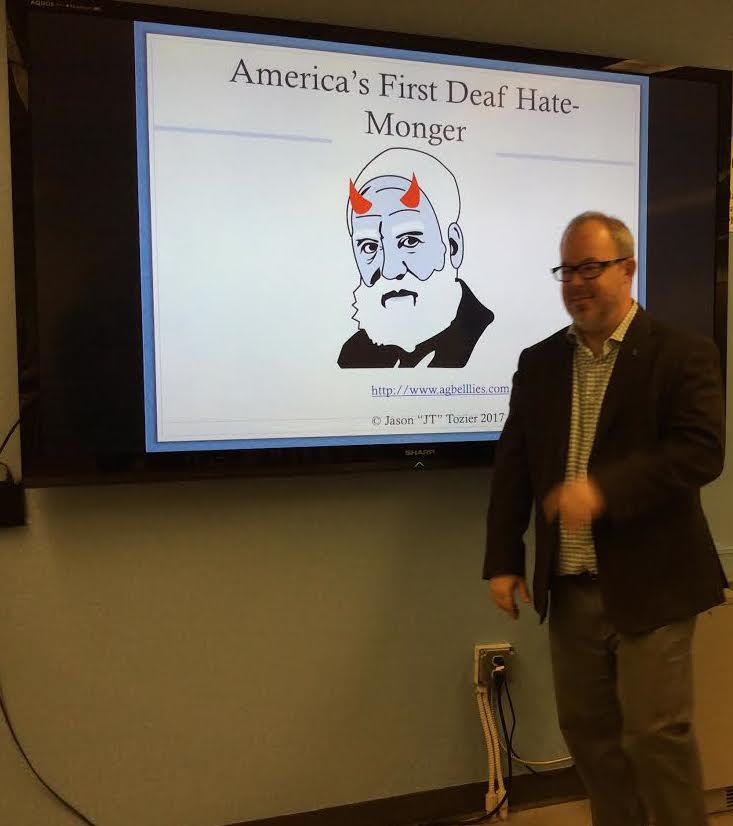 Donald Trump called Marlee Matlin “retarded”—a derogatory term in broadest human mind. That makes Trump a deficit thinker and a bully, too. The proof of torture and cruelty on Deaf people is overwhelming and incontrovertible. detailing an unlawful practice that was far more brutal and unnecessary than previously known.

Among the abusive tactics by Trump on many people has forced stressed positions, torturing and depriving Deaf people’s civil rights which has resulted in long-last psychological pain and suffering—in addition to deal with emotional trauma is the most dangerous thing when they were growing up and deal with bullying in schools. The link would be helpful to read:

Mr. Donald Trump is entitled to a full, public accounting of the torture and cruelty done in his name and the consequences of his actions. I write upon to write this and stop hate-motivated attitude toward Deaf people who work hard to change their lives around to destigmatize them as Deaf people. No more “retarded”—Deaf people are still the most marginalized group practiced by torture and abuse and should not be subjected to harsh conditions.

“Retarded”—is also a hate speech then his behavior becomes weak. In our human minds, we see a bully walking past the street, and the bully sneer at us, then will become invariably disappear. To our human mind, the awareness works. The goal is to teach people awareness who calls Deaf people “retarded” like Mr. Trump did, and it is vital that we need to manage the toxic environment to prevent this from happening.

Hate is about conflict. Conflict with themselves. It shows hate embodied with all of these other personalities; they are faces that seem to struggle with themselves despite being callous to their own experiences. It is a strange paradox that screams out of depth and power in pure, unadulterated self-reflection.

Deaf people who taught how to self-hate for being Deaf even calling other Deaf people “retarded”, it is the most focal key of the invisible hate like a core. Self-hate has scratches all over Deaf people that force the viewers to do two things: recognize the depths in the face and examine the sociological problem. Each scratch has a layer of contrasting pain underneath the first skin layer.

Marlee Matlin do not deserve something like this at all. Shame on Donald Trump!

We need to collect stories in ASL to study socialization as well as the production of Deafhood. We need to illuminate how Deaf stories “depoliticizes” between each other from long-term conditioning and not the dynamics of Audism to define human socialization as the process in which Deaf people learn how to carry themselves both mentally and physically in accordance with societal expectations. They learn what hearing people are supposed to do and what Deaf people are not supposed to do through four domains: their families, schools, friends, and the media.

Through parents, infants, and toddlers obtain “listening and speaking” lessons via activities that they are enrolled in and direct instruction. ASL is the direct instruction of all languages. For example, many Deaf babies who does not learn ASL are more likely to be language delay with no guidance. Once the babies learn ASL throughout their developmental period, they begin to identity with ASL and the state of being Deaf are more likely to grow strong identity. This influence is significant because many Deaf children develop strong Deafhood identities right there. It will become their role expectations and promote and cultivate with their parents and themselves into personhood.

We need to bring more stories and to discuss ASL/Audism as if they affect Deaf people and policies as well as practices which has governed their education. The purpose in this article is to discuss what constitutes “deficit thinking” and contrast it with the prevalent Oralism approach to Audism which patterns other governmental policies in its “denial of the Deaf”–

The stories are our biggest assets in these domains fostering the world in which Deaf people are not equal in income, prestige, power and life changes in the society. The stories need to take a biological and historical look at whether or not Deaf people are not sufficient to suit to be intelligent as hearing people are. The 1880 Milan Resolution, for the last 133 years, Deaf people has been the part of “developing oppressed societies”, and it has caused Deaf people to live as demanded by a hearing society  in order to survive.

The account of travesties against many Deaf people in social media indicates that Audism is alive and well in its policy. Why does Audism prevail? Let’s look at the Deaf perception of observance of natural law, which higher than any human law, and governs how people view their interactions with other people, animals and plants on the mother Earth. In contrast, the politics of Audism has created thinking based on timelines and progression, and progression cannot happen without accumulation and consumption.

These values creates many things that are included sustainable living and reciprocity to all other living organisms. Balance, reciprocity, and cyclical thinking (all thinks natural are cyclical–moons, seasons, bodies, people, and time) and create a philosophy of knowing that Deaf people exist on a cyclical continuum, and what you do now will affect you in the future. In accordance, you do not take without giving and you take only what you need and leave the rest. Deafhood is built on these tenants, collected through hundreds of years of observation and practice and intimate knowledge of their Deaf stories and their roles as careful students and caretakers.