The root of hatred is still there. Alexander Graham Bell Association never formally issued an apology in front of the Deaf community for what they have done to our Deaf citizens including Indigenous Deaf people and to our culture and language.

Where is the formal written letter? Where is the video message provided with subtitles in front of millions of Deaf people? Where is the article being published in The New York Times, The Washington Post, Los Angeles Times, The Wall Street Journal, and the major news outlets apologizing to the Deaf community? It is not going to happen. Why? They are guilty of a hate crime.

The Deaf community is being on the brink of being eliminated. It had been in North America for centuries and centuries. That’s the colonization of Deaf America and that is what Alexander Graham Bell wants to eliminate the Deaf community.

Laurent Clerc helped Deaf America since he first arrived in 1816; Truth be told that Alexander Graham Bell had been attempting to take away rights in the face of exploitation have been at the heart of hate crime targeting Deaf people from all walks of life.

The marginalization of the Deaf community had been targeted everywhere in social life. Deaf citizens had been suffering and unable to exercise capacities in social ways. Alexander Graham Bell was born in 1847 on the third day of March, and the economics of AGBell had been honored for the legacy of the oppressive system.

Nothing could be further from the truth, given that AGBell’s hatred of the Deaf people is the product of violent oppression by the hearing supremacy. The invisibility still carries around the Deaf community, and the colonization continues to attack the political, social, values, knowledge even in the worst colonized mind possible.

When a campaign partners up with Alexander Graham Bell Association, “makes them possible and even acceptable. What makes violence a phenomenon of social injustice and not merely an individual moral wrong is its systematic character, its existence as a social practice, its legitimacy” –[Young, I. (1990). Justice and the politics of difference.] 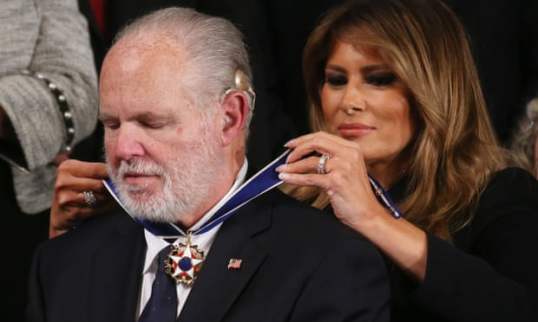 One of the worst hate-mongers in history, Rush Hudson Limbaugh III would be the first bilateral cochlear implant user to receive the Presidental Medal of Freedom. Correct? His general sentiments would mock Deaf people countless times before becoming “Deaf” which would be instant karma. Is it not a good penalty?

So stupid that he couldn’t even graduate from college. He does not deserve the title as being ‘Famous Deaf people’ because Rush Limbaugh is not a valuable Deaf member in the Deaf community and has nothing to do with the Deaf culture even if he has a cochlear implant.

The cochlear implant industry is profit-motivated and would collect profits above the well-being of Deaf people. For example, Oralism, eugenics, AGBell, the anti-ASL campaign, and of course, CI industry–all connected. There are thousands of stories about CI users who have derived little or no benefit from the implants at all.

While Rush Limbaugh, one of the worst bigots in America, that practices the society’s minds, sending the wave of hatred the same way by mistreating the Deaf community and he is getting the Medal of Freedom is indeed sad and humanely differentiated; Sharing the propaganda of the greatest likelihood of success in cochlear implant industry.

Want to make a bet that the same Rush Limbaugh has strong connections with the Oberkotter Foundation in any way? Limbaugh who would often make a lot of hate-filled comments targeting minorities as a radio-host in the decades of hostility, the approach in which the brutality of the Deaf community has been exposed more than ever before. A word of caution, a life of bitterness can leave Rush Limbaugh empty and shallow.

Cochlear implant industry and Oberkotter Foundation makes a deal to rake in millions, millions, and millions “blood” dollars so freely to dehumanize the Deaf community of ideas, events, and organizations that have produced a set of mob mentality against the legal right of being Deaf. Where is the freedom for the Deaf community?

In 1992, Rush Limbaugh makes a comment: “The poor in this country are the biggest piglets at the mother pig and her nipples. The poor feed off the largess of this government and they give nothing back.” [“The way things ought to be”, page 40]

What a selfish asshole, right? The highest civilian, the Medal of Freedom. He was never part of the Deaf community. Period. Not even for the highest civilian. Limbaugh himself has been avoiding from the reality where all the things mean-spirited to not only a political figure but mock the Deaf community. We must end the perpetual punishment of cochlear implant industries.

For the next global Palindrome Day, we must continue to have Deaf people on Earth and signs–we will not be intimidated by being wiped out. We must remain vigilant!

Darlene Ewan makes a good point about DOE (Department of Education) that divides the Deaf community. However, I’d like to share my thoughts.

…And the Truth Shall Set You Free.
A WordPress.com Website.