70 years ago on December 10th, the Universal Declaration of Human Rights was brought up with the idea to recognize that as humans we adopt equal rights, freedom, and pursuit of happiness.

The United Nations Prize in the Field of Human Rights is an honorary award given to individuals and organizations in recognition of outstanding achievement in human rights.

In the past, United Nations Human Rights had given to someone who passed away such as Eleanor Roosevelt. Why not Laurent Clerc? He contributed to Deaf community in the heart of human rights. Establishing the first American Deaf School in Hartford, Connecticut. For next 50 years, the school had trained many Deaf students in the field of educators to teach Deaf pupils to be successful. Laurent Clerc’s spirit embodies the self-determination of the newly Deaf space; his thoughts are still considered the strongest influence in Deaf people’s bodies, minds, and spirits.

“A knowledge of history is extremely useful; it lays before our eyes the great picture of the generations that have preceded us; and in relating the events which passed in their time…it lays before us the precepts of the wise…of all ages…”

There was no “rehabilitation” program or education for Deaf students. Laurent Clerc predicted the importance for future of the Deaf citizens to preserve and perpetuate in the language and culture, protecting and promoting ASL. French influence upon American Sign Language (ASL) and intellectual life of the Deaf has become quite pronounced as the result of the contact between Deaf people to seek for higher education. Not only in America, but influenced Canada as well, too.

Last September 2018, United Nations recognized its first International Day of Sign Languages, and it is a huge step. There was more than 70 million Deaf people living world wide, according to the World Federation of the Deaf, the higher education is pretty difficult to grasp, only two percent out of 70 million Deaf people have the human right access to a formal education.

Since Laurent Clerc’s arrival in America, his mission has been to provide quality individualized education honoring the talents of Deaf students, making sure they were given the highest opportunities to acquire academic skills necessary for success.

Making sure the long journey, the dark moments of doubts and struggles, going through series of emotional, mental and physical—and the feeling in a life time would end up being over, until Laurent Clerc’s arrival made sure it was never over. It was very much part of human right. Being the state of Deaf is a human right in the highest form of freedom.

Honestly, I do think Mr. Laurent Clerc deserve United Nations Human Rights Prize, the largest honour of lifetime work. What do you think? 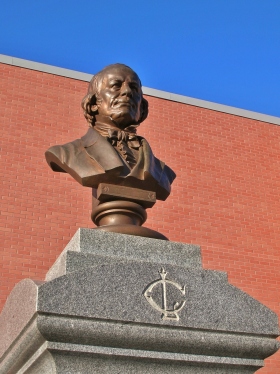