I just completed watching Paddy Ladd’s final and part three. When I first met Paddy Ladd in September 2012, in my birth state, I remember seeing some Deaf people who gave me dirty looks when I showed up there. There were ugly names throwing at me. One Deaf interpreter showed a great deal of displeasure when I was walking down the aisle to meet Paddy, the very same Deaf interpreter was attempting to block me because of malicious rumors the interpreter received from deficit thinkers. I realized that the very same person who supports Deafhood journey does not want me to succeed in my own journey. I refused to let them stop me.

Living in Pacific Northwest those years have not been kind to my journey. From the collective grief I shared my childhood life as a lost kid, I remember when I was 19, I received a full scholarship for two years at ITT Technical Institute, free tuition. They saw great potential in my skills and I was good at math.

For the next few days, it has been really rough time for me then on a Friday afternoon, I made a phone call through Telecommunications Relay Service (TRS) to talk with a representative who came to my grandparents house a week ago where I signed the agreements under peer pressure. I informed the representative that I was no longer interested in pursuing my education there because I was not ready in my own core. I dealt with a great deal of confusion.

A year later, I got a letter from Oregon State University offering me a full scholarship, and again, I had to turn down because I was not ready. I felt more confused. I was not sure where I would be doing with my own life. Then my life completely changed when I was jailed at age of 21, and hit a bottom rock. I was jolted back into painful journey. You know, an eagle’s nest has fallen from the cliff’s edge, crushed by a rock fall. Each day, layers of systematic oppression gain more, another layer of hatred I deal daily.

Then I got a job at a hotel in Portland, working in line cook, and the executive chef liked how fast I was, and the hotel chain and executive chef has encouraged me to enroll at the Culinary Institute of America in New York, and it was a huge honor, but I was on probation and I was heart-broken, and had to turn down the offer. It was tough time. So, I continued to work there for couple of years, struggling to find my own identity as Deaf person. Boy, I was really lost. I became the target from my own community, Deaf community.

I decided to enroll at a local community college, just to do something about my life. Then I became a serious student and ended up getting good grades and pushed me all the way to enroll at a university, that would forever change my life in many ways. I graduated with three degrees, all with honors at the same time.

Within few months after graduation, I got an acceptance letter from Gallaudet University for MA in Deaf Studies with emphasis in Cultural Studies in 2012. I had to hold that spot later. After meeting Paddy in Seattle, the next day, I immediately wrote him an e-mail, showing my passion to sign up for Deafhood Studies at University of Bristol under Centre for Deaf Studies and saw course descriptions, and I was so ready and eager trying to find a way to get there.

Deaf-centered academic studies–Deafhood thoughts. It was perfect! Then I learned that University of Bristol administration did not think Deaf Studies was important anymore. I was surprised—I remember that day well. I said, “Why? Why is it happening?” and then I felt even more lost.

The very next day after arriving in DC in October 2012, I visited Gallaudet University with a big smile.

The same year when it was shut down in 2013, I enrolled at Gallaudet University on a graduate scholarship in ASL/Deaf Studies, the course descriptions was not the same. It was not Deaf-centered philosophy. The ASL/Deaf Studies department was running erratic priorities, rumormongers, and saw great deal of favoritism, corruption, abusing powers, cheating grades, and an oppressive system continues to target Deaf returning citizens. It was not even Deafhood centric.

I lost scholarship fast enough and became the student of four days journey. I became the pariah at Gallaudet University. They do not support the idea of processing a Deafhood journey. They live in culture of fear, reaffirming its commitment to the society’s oppressive core values and norms.

One Deaf professor from ASL/Deaf Studies department once told me that the department is not the same anymore. I agreed. When I first saw the idea of Deafhood Studies, it was all about investment in the future. It was an integral part of one’s move toward compassion as the state of being Deaf. All the scholarships I turned down until I received a scholarship from Gallaudet University, the world’s only hub for higher education for Deaf people—was taken away. I was even more heart-broken more than anything in my entire life. They invested in hate and humiliation.

I could go on more, but the final question of Paddy’s interview: “What do you feel you’ve given to the world?” Paddy then answers, “What a question!”

Paddy has given my world a complete change and gave me an extra motivation to write a book—the most challenging task I ever done in my life. After reading Understanding Deaf Culture: In Search of Deafhood, the knowledge of how the constructed balance of power across levels of oppression affects the capacity and opportunities for Deaf people today and tomorrow. I learned much about myself by seeing thousands of Deaf people being oppressed daily. Even at Gallaudet University, too. It is not Deaf-centered university….not yet. 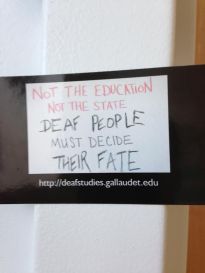 Seeing their stories invariably shows me much about their struggles and makes me think of my own. I have found Paddy’s contribution of coining Deafhood, an invaluable to think in terms of healthy and healing process, goals and expectations every time when I would suffer emotional pain; it is difficult to explain this. It is complicated. There was a huge difference between Deafhood Studies at University of Bristol and ASL/Deaf Studies at Gallaudet University.

When I think of Deafhood, I empower myself more. From my bottom of my heart, I thank Paddy Ladd for all compassion as a way of life and appreciate being state of Deaf. In one of my recent blog posts, Deafhood: A Journey of Greater Thinking—I wrote:

To master positive thinking, active learning is a core element of their learning. Deaf people would benefit a lot from their Deafhood journey to identity their freedom, bound, and inflectional, derivative, or obsolete environment and they shall design the goal and assessment for understanding of their journey just as much as building a high view of confidence. They would master the basic content and also express in creative and challenging ways. They feel the true growing of pain. They are taught content but process, the methodology by Deafhood journey is generated.