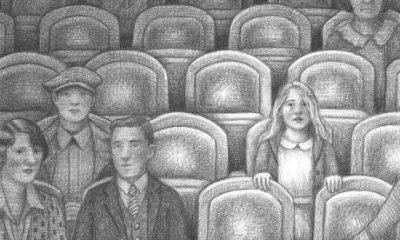 Ah, people has asking me what are my thoughts about the latest movie, “Wonderstruck” from what I understand that there were hearing people who pretended to be Deaf– has shed light on what hearing privileges really mean when they attack Deaf people and steal the image from them as well as free speech, too. I am not writing about the law or the Constitution, I am writing about how hearing actors or actresses hijack the system and using it to amplify oppression as a message. The illustration above was drawn by Brian Selznik.

I continue to be amazed by the unnecessary cruelty of the Hollywood industry, which has again taken aim at the most vulnerable members of the society in the name of language hegemony. Isn’t Hollywood industry was supposed to be the “civil rights and human rights” safeguard to protect Deaf people from unequal treatment? Obviously not. It is not the first time what Julianna Moore has continue to be ignorant about the importance of Deaf Studies in recent memory.

A graphic created by Amber Zion–Deaf person with plenty of talent!

This is the time to think about that there are plenty of Deaf talent can do to stop exploitation of Hollywood to hire hearing actors or actress to act as Deaf. We need to educate them in anti-bias and anti-bullying discourses. Can we educate them with effective tactics that defuse exploitation before they can trigger over time into the kind of systematic oppression?

When Deaf people show the world that they have talent in acting with better eye movements, learns of people with hearing privileges and deceit, they essentially disowns Deaf citizens and implore them to shut up and stay in the cell in order to allow them to beat their appearance up and harm their reputations. Again, when Deaf citizens learn that the oppression in Hollywood have been returned to be practiced, they are suffering in the hands of oppressors. Oh, the sentencing of their fate!

We are tired of the worst oppression over the past year that a well-known Hollywood actress has again stepped over Deaf people just like stamped out Audism! Did Hollywood really acknowledge their errors? No. Instead, in the days since, oppression of Deaf people in Hollywood scenes, they would probably refuse to acknowledge their mistakes. All evidence to the contrary, Hollywood have continued to insist on Julianna Moore’s false version as a Deaf person, ignoring the grief of Deaf community, who are trying to make an attempt to educate the society that there are plenty of Deaf people who can show their talents.

Even a Deaf administrator and moderator for Deaf Talent Guild News wrote, “I do not wish to see any more posts critical of Julianna Moore for taking the deaf adult role nor discussing plans for a boycott of the movie Wonderstruck, which frankly in my opinion would be counter productive. I know some of you may not have fond opinions of her after reading the news of what she did…she may have already realized by now she made a mistake; let her be.”

Umm, excuse me, what about the pain what Deaf community has suffered? Where is the compassion? This is a disgrace. We are talking about the opportunity—no longer in the invisible hand. Isn’t Hollywood supposed to be the land of the opportunity? Deaf people on Mother Earth have a reason–know no life other than America. Can we even recognize Hollywood’s America?

I want to make it clear that this is not hoax or an exaggeration. I have been personally embarrassed by this whole ordeal, but out of continued frustration, I find it now necessary to write about what occurred in Hollywood. I feel that least writing this post could help start healing process. When I had been chosen to as an actor for Deafhood Monologues in Washington, D.C.—I understood the importance of Deaf talent where Julianna Moore has twice oppressed the Deaf community—with the quote below:

You will know you are completely done with something when you give it up and feel freedom instead of loss”.—Emily Maroutain