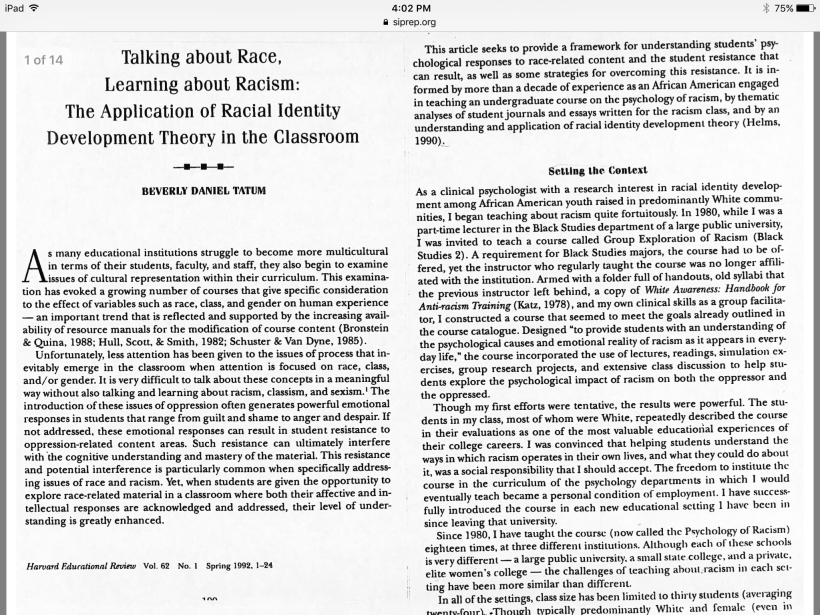 Imagine if you were offered a life of prosperity in exchange for all the hatred you experienced, would you take it? Back in 2011, I took a challenging course called ‘Methodology of the Oppressed’ to learn and explore practical applications of the methodology of the oppressed through the study of historical and contemporary socialized thought processes. Beverly Daniel Tatum, author of ‘Talking About Race, Learning About Racism: The Application of Racial Identity Development Theory in the Classroom’ really blew my mind away. It is important to understand those examples.

1. Racism, defined as a “system of advantage based on race” is a pervasive aspect of U.S. socialization.
2. Prejudice, defined as a “preconceived judgement or opinion, often based on limited information,” is clearly distinguished from racism.
3. In the context of U.S. society, the system of advantage clearly operates to benefit Whites as a group.
4. Because of the prejudice and racism inherent in our environments when we were children, we cannot be blamed for learning, what we were taught (intentionally or unintentionally).
5. It is assumed that change, both individual and institutional, is possible.

1. Race is considered a “taboo” topic for discussion, especially in racially mixed settings.
2. Many, regardless of racial-group membership, have been socialized to think of the United States as a just society.
3. Many, particularly White people, initially deny any personal prejudice, recognizing the impact of racism on other people’s lives, but failing to acknowledge its impact on their own.

You can find it online and learn for free. As to let you know, the hate I refer is the deeply rooted sense of language ignorance, of being afraid of silence. Allowing hate is one of the easiest things they can do. Herein lies the challenge and the doorway to language prosperity even in Deaf community, too. Hate is not welcomed.