When I visited Harper’s Ferry in 2013, I saw the rivers between Shenandoah and Potomac which has a story behind them. Princess Shenandoah and the Potomac warrior were forbidden to get married by their tribes. They both cried a lot and made the rivers to meet. That is where the Shenandoah and Potomac rivers meet. The Native American folkfore. There are many rivers that are crying and screaming of the discontents and declare Deaf returned citizens are forgotten people in the root of language oppression.

Activists must be well-honed with recognizing the language war that has been centered into society that deny Deaf returned citizens to use ASL or request for an certified ASL interpreter.  Once Deaf returned citizens became oppressed, and their language and culture are suppressed. At all costs, being an activist must not be a caste set apart, neither drawn from nor informed by threats. Even if it is death threat. There are plenty of premises that are very clear prima facie oppression.  The legal system in America has been appopriated by huge businesses and political friends.

Now it is good time to be an activist to wage the society that Deaf returned citizens are not forgotten today. That is the statement of fact that Deaf returned citizen is encouraged to speak up with certainty that tells a reality that it still exist today and tomorrow. Being an activist does mean to be returning Deaf citizen, hearing people that are open minded and undertand Deaf culture well can become our biggest allies, too.

How can our American society allow it? If sociologists do not research enough about Deaf returned citizens, then our society must be lazy and cruel when it comes to deny them a safe haven with care and respect. I believe that once you become an activist for Deaf returned citizens, you will become part of propserity. To build a stronger advocacy, there will be investing a lot of continuum of services that help them.

The five goals of advocating for Deaf returned citizens:

1) Demonstrate a Passion for Human Rights.

3) Provide a Senstitive Training For The Purpose of Safety and ASL. 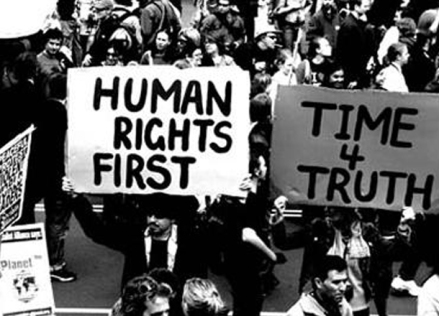 The ultimate goal of this is to teach and learn is palpable: Passion that will help the Deaf returned citizens engage in the positive environment, even if there is no “correct answer” in the processes of exploring the growing pains and improve their lives!

There is time to throw some light on the enigmatic shadow of deficit thinking that continues, since the 1880 Milan Resolution banning the use of sign language in communication and instruction of the Deaf worldwide, to prevail in our general society and governmental agencies.

Deficit thinking is when Audism, the term coined by Tom Humphries to define the belief that the ability to hear is better than being Deaf, becomes apparent. I wish to create an environment that giving a lecture or workshop would allow people to be more open minded away from the typical political discussions. I believe that creativity would allow people to make mistakes; Their art is knowing which ones to keep.

The debate about Deaf returned citizens is about the tug-and-pull debate between safeties versus liberties. Deaf returned citizens do suffer the scars that will haunt them forever. This is unfortunate. There is plenty of literature tells us that the vast numbers of Deaf inmates in prison does suffer crimes, recover from the assault and try to resume their lives as normal.

Again, the most important document of all is to understand the importance of Constitutional aspects of Deaf returned citizens, for example, the issue of due process is violated among others such as equal protection under the law. It is a waste of time given suffering by the Deaf returned citizens.

It is important to know that the rivers is for all of Deaf citizens to stand up and take action in person no matter what the controversy of the activism. Walk through across the rivers you desire and bring to the state legislators, signing out your concerns at political town hall meetings, ignite a street protest, call for television interviews, the activism must not be forgotten!

The rivers of Deaf returned citizens shall set them free to seek pursuit of happiness—a part of human life again. Why not?