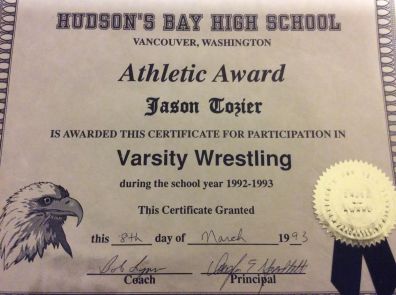 My three years lettered in varsity wrestling expect my freshman year because I was transferred late from other school and did not qualify for the highest spot in wrestling. It was one of my life’s highlights–winning Falcon Takedown Classic, Lumberjack Classic, placing third in Clark County Tournament, been in top three in almost all of tournaments except my senior year, placing 5th in sub-regionals.

My favorite one was the Falcon Takedown Classic after beating a guy in the finals that did not even allow a single point then the same guy later became an eventual state champion a year later. I had an honor of being the team captain and the only Deaf wrestler in mainstreaming school.

My weight class (108 lbs.) that year was considered to be one of the toughest classes in all of 13 weight classes where the wrestlers actually placed in the last top six at state from very same county. It was believed to be first and last. Very, very rare feat. At the sub-regionals tournament, the top five placers had beaten each other by a single point. My 5th place match- winning 1-0. That top four wrestlers got the spot qualifying for state. 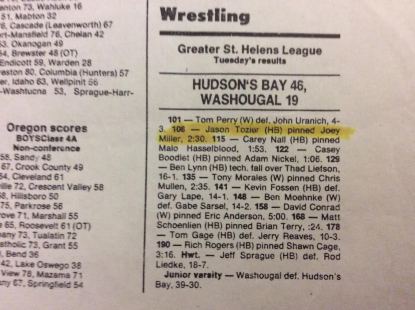 My only regret that I did not make it to the Mat Classic known for the state’s best wrestlers in each class. Even though winning 23 matches and lost eight times that year was one of my best times. Or winning 47 matches the last two years. I’ve faced some of state’s best wrestlers and went to the distance. Not only that, I also faced best wrestlers in arch rival state, Oregon. At the same time, I’ve faced enormous pressure and bullying from hearing peers in school as well as the team. I learned how to be a champion. Bullying me because of my state of being Deaf has gained a lot of strength.

How did I become a wrestler? It was when I was in 7th grade, I’ve had enough severe bullying in school for two months and had to get away from home problems [https://audismnegatsurdi.com/2017/02/13/my-cauliflower-ears-story/] and decided to try out, and got my butt kicked by experienced wrestlers, one time I was about to quit the team, the interpreter who was a former wrestler told me that I would be a wimp to do that, eve worse, he called me vulgar names and I didn’t really like the way he said to me. The head coach didn’t even understand what he was saying to me.

So, I stayed all the way then two years later, winning junior varsity wrestling tournament then once I was transferred to high school in other school district, that high school was one of state’s wrestling powerhouse. That changed my life forever even more. The head coach was a legendary. My sophomore year, the team was 9-1 after getting beaten in the first match which was embarrassing- the next day, we had a pep talk from former two time state champion telling us that we could be better than that. The head coach did the right thing by inviting him over.

After the pep talk, we whopped every team by 20, 25 points, placing  second place as a team in Clark County tournament by two points, winning district, regionals, and placed several wrestlers in the state. The last three years as a team, it was the best times of my life. I got to wrestle former champions where the head coach encouraged me to wrestle them and became a better wrestler.

My senior year–I never forget the way one assistant coach from Kelso high school telling me that I’d never had a chance to beat his wrestler in semifinals, by saying the most awful thing ever that fueled me up. He was ranked #2 in the tournament and I was seeded number three. I pinned him 35 seconds just like that and looked at that guy with smile. I never forget his face! Then I won the Lumberjack classic. 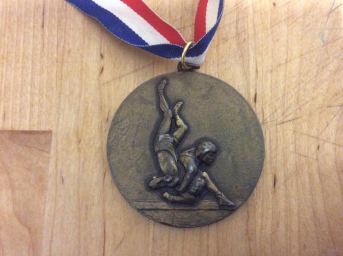 Looking back, I thank the interpreter. I credit him for everything. I learned how to overcome bullying and hate. I became stronger. Running 10 miles, there would be few times, I’d carry a small log on my shoulder walk forward and back on the football field couple of times. Man, I loved being an athlete and proud of my cauliflower ears. Driving over to Portland for the prestigious wrestling club called Peninsula wrestling club and train there for two, three hours twice a week with state’s best wrestlers–even after wrestling practice at high school. Good times!

Too bad that I did not try out for Deaf Olympics. 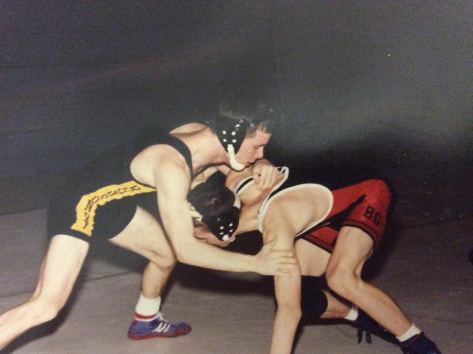