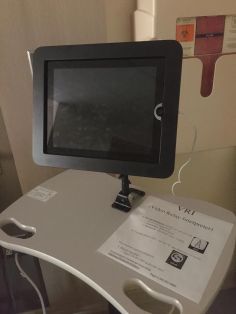 While I was a patient last November 2016, VRI has broken down four times due to “technical difficulties”

The U.S. Court of Appeals for the 11th Circuit wrote that Deaf patients could sue against hospitals for neglect of live interpreters instead of using video remote interpreting (VRI). I never liked using VRI myself as a patient. In fact, last November 2016, when I had a massive heart attack, I remember the first thing when one interpreter said to me, “Look, you need to use VRI–much easier for you to use it” and I said, “No, thanks! I prefer live interpreter” and I realized that they breached against my wish as a human being. Do you even realize that it was also a culture of fear by pushing fear in patients’ faces?

From the link I will provide you below:

A jury could find that [five Deaf patients] were denied effective communication; that nurses were aware of the denials; and that the nurses refused to correct the denials….The evidence indicates that the nurses, knowing the patients required an interpretive aid, relied on the VRI to facilitate communication with the patients; were put on notice that the VRI was not accommodating the patients; and chose to persist in using the VRI without correcting its deficiencies… In fact, it appears that the nurses even abandoned the VRI altogether at times without providing an alternative interpretive aid.”

I hated using VRIs. There are couple of times that VRI would not work while I was in the hospital recovering and noticed that they do not understand the seriousness of language barrier and hegemony. The worst thing is that I was forced to “live” by hours ordered by the interpreter—how dare the interpreter who is employed by the hospital staff makes rules for me? 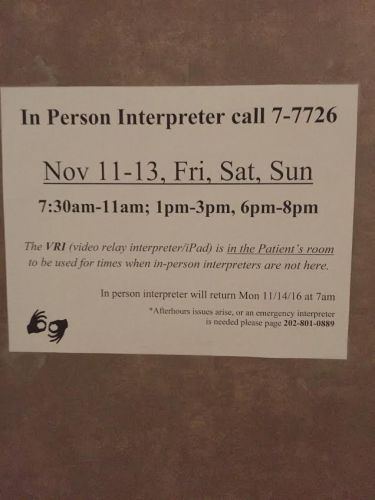 The unthinkable is happening everywhere throughout the country that Deaf people are vulnerable that are being exploited, physically abused, and emotionally abused by the hospitals on Mother Earth that was supposed to love thy neighbor. It is impossible to know just how many Deaf patients who struggled for human rights are out there.

When I made complaints against the hospital and asked National Association of the Deaf (NAD) for help, know what NAD said to me? “Sorry. The case is closed!” and bid me good day. That was fucking bullshit. Even more distributing that in many cases, NAD are doing very poorly job not to give Deaf people enough protection.

Is it the reason the systematic failure that makes it very difficult for Deaf people to seek for rightful justice? Also, we must remember former NAD president, Christopher Wagner who supported the idea of VRIs, which caused huge conflict of interest while he was working for zVRS to bring into political favouritism.

Through those stories are a way for all of us to escape our minds and experience their pain, deep down the problems are very real. And in many ways, our characters are what the reflection of the light. We need to help them and set a good example. We need to understand them that would bring quintessential to the human condition.

Deaf patients who were pressured to use VRI or face consequences promoting human rights abuse—I think it would be good idea for them to hold Christopher Wagner and NAD accountable. Stop abuse of power, corruption, undermines rule of law, money, bullying, ignorance and bullying!

Time for those Deaf patients to sue against NAD and Wagner. Do not be a bystander. VRIs has done major damage more than they really think.