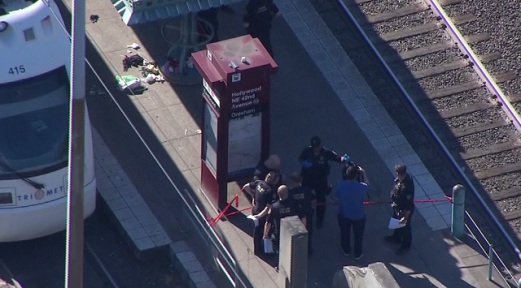 Why not America toughen up hate speech laws like other countries?

See that picture above? MAX train. Powerful words. Emotional words. What happened on May 26, 2017 in Portland, Oregon intensified dramatically after the horrific hate crime event. Violence has grown exponentially—more like hate exponents targeting Muslim community. As of this writing, hate and murder have claimed two people that day—it has impacted my life even though I am living in District of Columbia, Portland was my home. My Pacific Northwest family roots are mostly in Portland.

The vast majority of shock and pain have been shared. The world witnessed the most violent single incident of hate-motivated violence so far in Portland, it is time for us to stop hate crime. Enough! It starts with us! Educate yourself and start stronger awareness!

This is also terrorism, an act of demonstrating the power in the eyes of white supremacists. Stop white privileges. White supremacy do not belong in Portland. Ignorance. Self-centered. No compassion. No cultural awareness.

As we cope with pain in a world that seems ever more dangerous and out of control, at the same time, white supremacists beam messages throughout the world that is attempting to demonize Muslims—carrying the new norm: Islamphobia. When I Signed up for Hate Crimes and Bias course ten years ago was one of my best decisions ever. After that, it is my civil duty to continue and educate my own community: Deaf community and how to stop hate crimes.

To my biggest surprise when I discovered that Oregon is now the national champion of higher hate and bias crimes than anyone in the United States TODAY! NO, I AM NOT KIDDING ABOUT THIS PART. It is important to remember that Oregon was founded as a “white haven” and the only state not to follow 14th Amendment of the Constitution until 1973! Reminder: I made an ASL VLOG few weeks ago called Oregon’s Great Racism Roots: A History Lesson. Link:

The 14th Amendment has been part of the Constitution since 1868. Three years after Lincoln’s death. Portland is the whitest city in America. There are couple of skinheads groups, hate groups, white supremacists living in the underground. I would be more than happy to provide the names of groups at no charge.

Why did we not see that it would come back and haunt Oregon again that is now known as the number one in reporting hate crimes anywhere. We failed. They are trying to take Oregon back as the original “white haven”—not  very cool! Those same people who preach hate including Jeremy Joseph Christian who is now charged with hate crimes has made their names more painfully than perhaps any hate crime, even in Deaf community, too.

I will not support any kind of hate and stand together with Muslim community to denounce the hate. Portland do not need those haters. They do not belong there. Let’s give them the exile pass away from Oregon. Three people, two of them died and one of them got stabbed fighting hate.

In questioning hate crime what Jeremy Joseph Christian done, a majority of political favouritism supported by the white supremacists makes things even painful for my Pacific Northwest roots and go through stages of grief.

We do not need Trump’s White America. Jeremy Joseph Christian may put Portland on the map to gain attention to follow the lead, but we sure will empower peace trumps over hate. I’m one of them. White supremacists do not belong in my roots or Oregon in this matter.