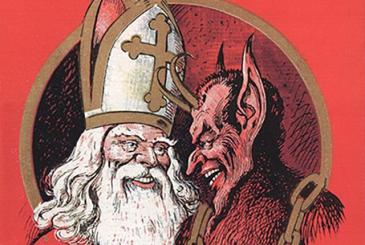 Wait. It looks like AGBell on left side…but what about the other side of AGBell? Krampus?

As you know, Christmas is coming soon—there is a secret life and…dark side of Alexander Graham Bell who actually was real Krampus in life—who is half-goat, half demon as described in Austro-Bavarian Alpine folklore, a link “Who Is Krampus? Explaining the Horrific Christmas Devil” that would lead you to read and understand what the story about Krampus and yes, it is published by National Geographic Society, where Alexander Graham Bell was once president for short term. The link will be shown at the end of the post. Every year, we know that Santa Claus known as Saint Nicholas, Saint Nick, Kris Kringle, and Father Christmas.

In 1977, the same year where Tom Humphries coined the term, Audism in his doctoral dissertation—there was an anthropologist John J. Honigmann wrote also in 1977,

“The Saint Nicholas festival we are describing incorporates cultural elements widely distributed in Europe, in some cases going back to pre-Christian times. Nicholas himself became popular in Germany around the eleventh century. The feast dedicated to this patron of children is only one winter occasion in which children are the objects of special attention, others being Martinmas, the Feast of the Holy Innocents, and New Year’s Day. Masked devils acting boisterously and making nuisances of themselves are known in Germany since at least the sixteenth century while animal masked devils combining dreadful-comic (schauriglustig) antics appeared in Medieval church plays. A large literature, much of it by European folklorists, bears on these subjects. … Austrians in the community we studied are quite aware of “heathen” elements being blended with Christian elements in the Saint Nicholas customs and in other traditional winter ceremonies. They believe Krampus derives from a pagan supernatural who was assimilated to the Christian devil.” [The Masked Face. John Honigmann. 1977]

The key line from Honigmann’s words: Krampus derives from a pagan supernatural who was assimilated to the Christian devil. Bingo! That fits Alexander Graham Bell where he made a damning message for the parents of Deaf children to make a Christmas list to make sure that they need to be whipped and punished nicely, Fred De Land wrote in his book, Dumb No Longer: Romance of the Telephone, published in 1908, and quoted Alexander Graham Bell, an early supporter of the eugenics movement to improve human breeding, saying that:

….in all our relations with deaf children we should strive to forget that they are deaf, thoughtfully encourage them to forget it….”

Indeed, Krampus choose to patronize Deaf people! To whom do we the Deaf suffer from Krampus? What happened to Deaf people after the 1880 Milan Resolution banning sign language, then leads to these questions: Did Krampus make sure American Sign Language (ASL) is doomed to end precisely because of such a belief that spoken language is so precious that it must be learned? Is it absolutely necessary that Krampus forces each Deaf baby to learn how to listen and speak? Krampus also stole the telephone fame that since become not the glory but the suspicion.

Does Krampus even force all the most technologically advanced societies, for example, cochlear implant industries at least to be perfect Christmas gift as the Deaf communities are being judged and targeted because they are Deaf? Why are they bogged down in the same type of worldview that enabled Krampus to rob the Deaf and ASL to make them forget that they are Deaf?

After all, spoken language chauvinism has been around for the entire history of the Deaf, across many different cultures. Krampus is guilty of crimes: Language invasion by trespassing and destroying Deaf culture every year and used unlawful surveillance and privacy violations, causing human cruelty, intentional infliction of emotional distress, human rights violation, and most importantly, under the hate and Audism influence.

How come Alexander Graham Bell did not get hauled before a judge to determine whether he is insane or, in fact, the real Krampus? Millions of Deaf children across the world are instead being on trial in courtrooms makes a powerful scene for Krampus who holds the power. Now, it got me thinking: Whether Alexander Graham Bell is a fraud or gets away with hate crime. Have you ever wondered how many times he got away with this?