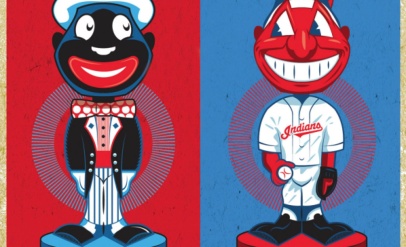 Leading my community service through the heart of Washington, D.C; I refuse to slow my stride when I posed a question for the panelists at an all day conference called Racist Stereotypes and Cultural Appropriation in American Sports held at National Museum of the American Indian back in February 2013, a week before my first heart attack, I was honored to meet Ben Nighthorse Campbell, a former United States Senator from Colorado. The museum offered the cream of the crop American Sign Language (ASL) interpreters and I am forever thankful for their support.

It was one of my best experiences I ever attended. The conference was intense, emotional, and educational trying to minimize Racism in sports. I was very happy that Chicago Cubs, my preferable team to win the World Series, beat Cleveland Indians. The logo by Cleveland Indians, the chief racist about Chief Wahoo was to me, the most offensive logo in all of sports—actually, the same company as Atlanta Braves, Washington Redskins, and other racist mascots. With a big grin on his face, red skin, and a feather coming out of his “stinky” hair, that is why it is called Chief Wahoo—the fans in Cleveland are clearly ignorant and uneducated what racism is really about.

After Chicago Cubs whipped Cleveland Indians—where Native Americans learn to embrace Cubs in their backyard as a symbol—a natural animal in the making. It was a curse, all right! 68 years and counting—I actually smiled BIG TIME that they did not win World Series. They do not deserve it at all because from the conference, I met and seen people telling their struggles and being belittled because they are Native Americans. It was grossly offensive to see the logo in 2016 World Series; it needs to be removed from the sport world. The curse remains on Cleveland Indians forever—I do not have any sympathy for those fans that cried that they lost.

I remember seeing the video where they ask the fans in Cleveland to see the logo, all I see a lot of stupidity and ignorance—a form of white supremacy and of course, it is also language hegemony and belittlement. How do I understand the emotions? Well, on my father’s mother’s side, my great grandmother was a full-bloodied Cherokee and I celebrate for her heritage. Now you all see the tragic what’s going on at Standing Rock Indian Reservation in North Dakota and that was bullshit what the white privileges are doing to Native Americans there. If you do not know what Standing Rock Indian Reservation is all about, well, the government is trying to install pipeline on sacred land where Native Americans were buried—a high genocidal action. I visited North Dakota once and boy, did the spirits blow me away. Water is sacred there!

It is very important to know that the Deaf community need to heed the knowledge that there was a treaty that people do not often talk about, the 1851 Dakota Land Cession Treaty where the land belongs to Native Americans and I’m sickened to see how much militarized police ROUGH UP Native Americans—on their own land! Times were hard and tough; their lives were chaotic—each hour it becomes stressful and they do not need that at all. They were here way before white privileges showed up and see how it happened today. How can Deaf community not see it? Outside, many Native people from where, for example, North Dakota, South Dakota, Oregon, Oklahoma, Nebraska, Iowa, somewhere leaning against a chain link fence and keeping them out of their own land. Is it without demanding allegiance?

The definition of allegiance: loyalty to a person, country, group, etc. [Merriam-Webster Dictionary].  It can be tricky. That is why I do not believe in pledge of allegiance. It is a fraud. I can remember in grade school, I was required to do pledge of allegiance in sign language forcing by my own interpreter in a fucking hearing  classroom and that makes me feel like lousy.

It makes me even sick what Deaf people are wearing jerseys of Cleveland Indians, Washington Redskins, all the offensive logos—an ASL teacher for a community college wearing Redskins jersey making ASL videos mocking Native Americans while wearing a jersey in a white privilege is really a mistake and will continue to make the mistake now. Support #NoDAPL

One thought on “Deaf Community: The Gravity of Racism in Sports”