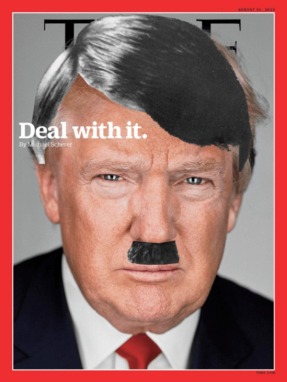 After watching NBC’s “Nightly News” with Lester Holt tonight, there was an interview with Donald Trump–as my professor who specializes in hate crimes warned America last fall that he is the new face of white supremacy and he was right! I also specialize hate crimes in Deaf community as well. The interviewer asked Trump why he was against a federal judge–“because he is Mexican“–WHAT????!?! He actually said that!

You know what, Donald? FUCK YOU. The federal judge was born in Indiana and that is in America–not even close. You know why? Because of his “looks”-and that is a dangerous statement coming from an American president candidate

I cannot believe what I am seeing right now. The highest political office in the United States–preaching racism, xenophobia, and misogyny is what I would never imagine to see something like this.

In America where I had been bred and buttered for 41 years, the roar of the crowd as Trump steps up to the microphone–it is scary to see something like this! The future would be clouded with political hatred and that is not what democracy should be in America, and I am sick of his hatred anymore. I have a cousin who is also half Mexican by the name of Cruz, he is my mother’s youngest sister’s son–whose his father was a full-blood Mexican lineage and a very cool one. I am not going to let Trump shit-face my cousin at all.

So, Donald, fuck you….you fucking fart rammer, and get a fucking life, you fuckin’ scrotum gobbler!

One thought on “Donald Trump: Hater-in-Chief”