……in 1965, when two deaf colleagues and I finished the first dictionary of American Sign Language. My pleasure with the current activity is not unmixed, however. To a certain extent many who study signed languages take that first step over and over again, but one step doesn’t get us far. We need the second stage of the original idea to move it forward.” [Stokoe, Language in Hand: Why Sign Came Before Speech, page 2 in chapter, An Idea That Would Not Go Away]

The world has never really had another William C. Stokoe. While his name might conjure up images of American Sign Language (ASL), William was much more than the father of ASL, William was even bigger than the Vitruvian Man. In short, he was a genius. In the summer of 1955, William walks into Gallaudet College for the first time; the unexpected passion shows up in the picture. He pledges for human rights for the Deaf people to preserve ASL in the public spaces, sleep in the houses, their shelter system remains strong and ASL is impossible to lose.

This investment must provide increased education, assistance, as well as other services called for in plans developed by human rights today—first, build a stronger system that connects Deaf people with ASL is a moral imperative that also makes economic sense and strengthens Deaf community. Deaf people can benefit from the expertise of Deaf leaders in the many outstanding programs to preserve ASL, for example, the current president of California Association of the Deaf [CAD] advocates a bill SB210 to preserve ASL in 2015, already making a difference in Deaf community.

How did Stokoe do this? The answers lie not in language or science, but the in the way in which he saw ASL around Deaf community, and how that made him the father of ASL, it is the same approach that made his discovery so remarkable, that enabled him to invent many of the aspects of Deaf people’s lives today. What was it that inspired and shaped his genius? Can we learn his talents and traits to seek and recreate in our own quest for ASL innovation?

Remember the classic movie, Back to the Future? Whoooosshhh! 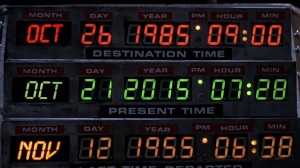 Now is the time to support a comprehensive strategy with measurable, long-term goals to preserve ASL. It is important that ASL is a byproduct of the modern way of life, completes with the human cycle. Time was, a Deaf person could wander, walkabout, explore and they have needs of permanent domicile, on account they are more nomadic—what is nomadic? The word means anything that involves moving around a lot.