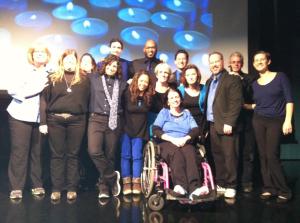 Because so often when I say I am unqualified for something, what I am really saying is that I am too scared to try it, not that I cannot do it. The story is about Deafhood Monologues: Washington, D.C. 2013; and I happen to be part of the cast. It was a month filled with mental torture, both in body and mind.

That was where I suffered my first heart attack during the audition for the first three hours and I was practically in much pain that I could not fathom. It is important to recognize right away when something is wrong with you and my heart was about to give up. As Jen Sincero would write, “procrastination is one of the most popular forms of self-sabotage because it’s really easy.”

But I had a friend in town for couple of days and became a vital reason to be destined driver. The doctor said that I was extremely lucky to be here. Not a choice that I would make, this heart I carry hold the greatest hope for the future. If stress can be virtually eliminated, keeping Deaf community together is the optimal goal. It produces the greatest returns in survivors of malicious rumor-mongers and peace to all whose struggle with any form of harassment.

The identification of my returned citizen status marked me as an outsider of Deafhood Monologues. I refuse to let it separate me from the rest of humankind. My very first theatrical experience ever looks up to me and become a winner and pedantic to supply the ordinary ideas of underdogs to this great public contest. The whole indictment failed to crack my heart into pieces even after being out of the hospital for barely a week.

The heart was supposed to be productive despite the scheduling difficulties. If you google Deafhood Monologues, making its undercover work more difficult than it need be. But challenging to keep the spot in the cast is no easy feat. I came out as a winner at the end. It does feel damn good! It does!

How does it take to be a winner? I would like to thank each and every single person in the cast who believed for my effort to be a winner. My good friends, including the same friend above, for the support and commitment to Deafhood Monologues, had floored me. I am honored to have won this role, which will always forever enable me to continue empowering Deaf returned citizens and working closer to creating many open doors for Deafhood Monologues in the future. To celebrate this significant milestone, my first of four heart attacks shall be remembered for its adversity.

Now that is a winner! Don’t you love to be an underdog? The quote that will go out in bang, “The big question is whether you are going to be able to say a hearty yes to your adventure.” Joseph Campbell; American mythologist.