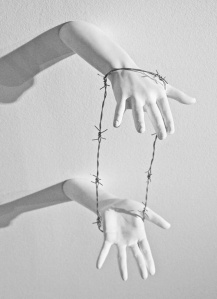 The root of this aforementioned control from stealing Deaf people’s language known as American Sign Language (ASL) has been profiting from not respecting Deaf people’s culture and selling music through poor signing skills—seeking a lot of money to be made in promoting American Sign Language. They find a way to make a lot, a lot of money in media industries. The same media today does not get it at all.

The couple known as Tina Cleveland and Paul Sirimarco’s Singalong who was made recently few weeks ago has become a hot topic in Deaf community, I decided to watch few other of their videos along with people’s opinions aside, the description of Paul becoming a struggling musician and exploit ASL. Tina as an interpreter should know better. How could she do that?

While I was watching their videos, I would like to point out that exploiting ASL for music and money has become a crisis that threatens not only human collapse among Deaf people’s culture and language for Tina and Paul’s own costly services. They need to be honest about oppressing Deaf people every day. Tina and Paul were showing plenty of cultural apportion, but not only that, but they also are stealing Deaf people’s life, liberty, and pursuit of happiness.

The worst thing is that the American media industry is allowing Tina and Paul to do a “language profiling” on Deaf people—it becomes a disease at the heart of today’s oppression system. Have they forgotten how to work with Deaf people for the benefit of our society? The highest philosophy in their own rules: For not living one’ life. For example, when did she was in ITP (Interpreting Training Program), did the program teach her to support and give services that benefit all Deaf citizens equally? ITP needs to take root in many shape and forms, creating fear. ITPs need to address with a tough-minded yet compassionate style that is both accessible and enlightening.

ASL is all about enthusiasm and interest in Deaf people, it is a pleasure and life becomes joy. Once Tina and Paul are doing a video, they should know the most important rule is that it is a duty and life is slavery. The goal for us Deaf people is to generate stronger awareness opportunities to the community, and in the process, to seek support from the unbiased American media industry financially and conceptually. Again, Tina as an interpreter actually introduced all bases on bias against not only ASL, but also the Deaf, and we need more of activists to stop their activity. It will allow the participants to learn how to identity various biases.

“It is our hope” as George Veditz, signed in the film, The Preservation of the Sign Language in 1913. It is very important that Tina and Paul must remember that it is each person’s right to use ASL for Deaf community. Also, they need to know that where it comes from as well as the activities and attitudes, which it describes. If Tina and Paul do not know, with confidence, their part in the whole and our place in history, the outcome would be different.

One more thing, Tina as an interpreter needs to realize that interpreting is not about people who interpret or translate between ASL and it spoken or written counterpart English. It is about understanding between these languages and it is important that affects ASL interpreters profoundly. Tom Humphries wrote Talking Culture, Culture Talking, We the Deaf often told stories but we do not known about “hearing” stories. Did Tina and Paul prepare well for triads, for example, stories, actors/actresses and audience? Tina and Paul’s Singalong is not accurate, and yet, the audience must appreciate them.

Today the media remain ignorant of Deaf people’s language and culture. Demand Tina and Paul’s wealth and privileges to be subordinate to equality for the masses not the few; for example, do not use ASL for their own profits. Did the entire of Rome build overnight? It is a massive responsibility.

When I saw Tina and Paul’s show for the first time, I became dumbfounded on spot that something was funny in another language. It is not laughable anymore. The monopoly of Tina and Paul’s services is wrong across America. It is unfair and unethical of Tina as an interpreter in a profession—again, erratic interpreting in music next to Paul who does not know ASL well is costly and burdensome. It is another chapter of growing pain for Deaf community.