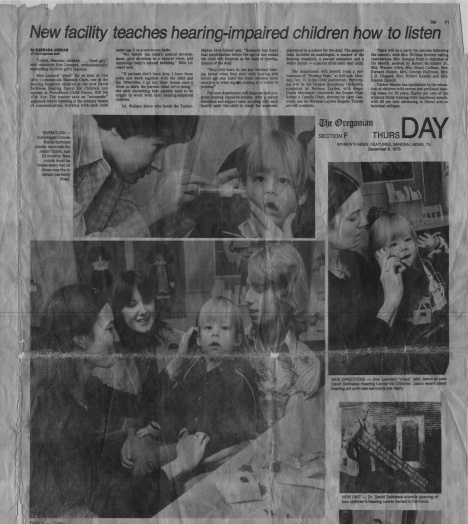 First, I would like to remind that American history represents a paradox of freedom. Freedom and equality are two deeply related ideas in the national ethos. For instance, equality of opportunity, and freedom for the pursuit of individual happiness, are embedded in the American consciousness.

However strong the association seems to be, freedom and equality are two distinct concepts. Freedom generically describes a right of all Americans. In a growing citizenship of the Brave New World, however, freedom does not provide an equal opportunity to groups, for example, Deaf people and privileged people. Freedom is for superior hearing people with historical lineages and titles, liberty, safeguarded life, and the pursuit of happiness. The playing field for political opportunity presents a free but unequal opportunity for minority groups and other thinkers. Deaf people are forever outlined into a minority group or another people.

A Deaf person in this Brave New World does not share the same opportunities for creative pursuits as their hearing counterparts do. Deaf people are to remain in the private sphere of patronage and domesticity. If a Deaf person attempts to reach a hearing audience then he has to be heard. Is a Deaf person who cannot express artistic and political visions, who is confined through societal delegation and obligation into a solely private, domestic sphere, truly free?

Frederick Douglass grappled with the paradox of “free but unequal” notion in his writing, and came to very personal interpretations of what it means to be truly free in the contemporary society. Frederick Douglas also struggled with the paradoxical issue of freedom. Americans are entitled to sovereignty and due process for their quest for life, liberty, and the pursuit of happiness. However, the affluence afforded by American freedom depends upon the denial of his human existence. African slaves were viewed as properties, afforded no rights, and no official standing to be acknowledged and recognized in court, and were without the due process of the law. Douglass escaped slavery, but only truly envisioned “freedom” when he gave his first oration about his slave experiences to an abolitionist audience. Douglass experienced purpose, a sovereign act of self with which he found meaning. His own freedom was not enough. He was not truly free if he did not commit himself to the abolishment of slavery. Douglass’ vision of freedom entailed a multiracial society on equal footing, and afforded the same justice.

Douglass did not believe slavery to be a natural condition or a predetermination of oppression. Slavery created a value system advocating cruel, unjust treatment, stolen labor, poverty, gross neglect, and the literal dismantling of human families.

Now, see the picture up there. That was me as a young child seeking freedom to have the rights of being Deaf. I used my hands to show that I do not want to be viewed as potential hearing being. I had no instruction, explanations or guidance from my mother or father. I had a shaky background to make judgment of these experiences, so I stumbled along and was caught between fear and ignorance. After learning the word of Deafhood few years ago, I have spent the past few years of my life trying to extricate myself from the hearing world that was full of deceptions. It was interesting to know that Alexander Graham Bell Association was responsible for working against my being Deaf by singling me out for a special attention.

Where was my freedom? Three months ago, I suffered heart attack and was bought to ER as a patient, and, as I expected, as being Deaf, I get treated as a second-class citizen. Does Deaf people “patients” come in as a second? The United States is supposed to have the finest health care delivery in the world, barring none. But it does not always seem that way, especially when you are a Deaf patient. I know, I know….right about now you are saying something like, “What do you mean, ‘Deaf patients come in as a second’? Why do we look like we are the extra prescription or two to be written up by doctors?”

When I was brought to ER, for example, one of the team doctors asked me if I would like to be cochlear implanted. WHAT? EXCUSE ME? COCHLEAR IMPLANT? It clearly offended my intelligence property and my rights as state of being Deaf.

The doctors knew there are three elements within their profession: cost, quality, and service. Cochlear implant companies offer a bait with their inflated prices, and therefore their gross success on fooling deaf people for their ears and money. The companies who make cochlear implants promote deaf people as a façade in order to defraud the public out of millions if not billions of dollars.

Alexander Graham Association and its friends had developed an acute medical awareness and fosters the mindset that there is a cure or suppressive agent for any hearing ailment. They are continuing to look for cures, not only for allergies and insomnia, but look to erase Deaf people off the face of the globe. When I mentioned that the picture of me as a young child, they were trying to put hearing aids on me. Does it mean the hearing aids comes first before me as Deaf child? In this picture I appears to come in as second? Hearing aids took over everything to make sure I acted like a hearing child. Once they put hearing aids, or any kind of amplification, they took the person-hood out of me.

Think about cost of equipment, economics, and development. Even when I was forced to use hearing aids in public school, the teachers would check on my hearing aids to make sure they work. Did it mean the hearing aids come in as the first and me as the second? My speech teachers made sure Oralism comes in first and I come in as a second as a Deaf child.

Why do I have to come in second with everything? The AGB Association needs to be shaken up! Frederick Douglass once said, If there is no struggle, there is no progress. Deaf children needs to earn their FRREEEEEDDDDDDDDDDOOOMMMM!!!