How Donald Trump allows the destruction of the Americans is to be the greatest genocide that mobilizes around the world, destroy the free press, and has under-minded the medical and science industry including the politicians.

It makes you wonder about those two men (Alexander Graham Bell and Christopher Columbus) who had practiced the greatest threat to human beings.

After watching Carey Ballard’s ASL video about 10 stages of genocide in Deaf community, it was very good video! Deaf people need to stand up and oppose genocide laws. How many prominent stories would need to criticize the practice of genocide before the courts will listen to us? We all need to remind ourselves that sharing a story is powerful. It starts with you. United States Supreme Court motto: Equal Justice Under Law. We need to study International Court of Justice Seal carefully and examined.

With genocidal practices going around Deaf community in America, the rise of cochlear implants is not even funny, we must continue to resist and believes in empowering Deaf community harmed by cochlear implant companies. We believe in sharing truth to power and it is the merit key to pursuit of happiness. When a former cochlear implant user share their stories to carry their lived experience suffering against this dehumanizing system, the stories will make all the difference.

To resist against the fast-spreading genocide practice—Deaf community need to build an important movement and be strong. I believe in the power of invisible stories. It would bring cochlear implant survivors together to build powerful change of agent whom of them suffers against corruption. We also need to bring up discussions and understand more about the stages of dehumanization, pedagogy of the oppressed, and marginalization. We need to overcome the ignorance and culture of fear about Deaf people.

The hearts and minds of Deaf community do not need to be viewed as weak people and easily targeted for profits. The stage of genocide needs to be challenged in attitudes and beliefs that created fear, oppressing Deaf community directly impacted by the larger, if not, biggest dehumanizing system. MJ Bienvenu wrote, “We need to ask a larger question……why do we need Deaf Studies?” in Bienvenu’s article quoted from ‘Deaf Studies in the Year 2000: New Directions.’ It is indeed a critical thinking question that we all need to set a good leadership for better directions to stop the mass of cochlear implants.

The goal of wiping the term, ‘Deaf’ off the face of Mother Earth is a reflection of oppressive and hateful leadership. Cochlear implant companies and the leadership of Alexander Graham Bell Association remains a lying dweller in education rankings, the divide between Deaf people has grown into a different picture.

Deaf babies are being targeted for profits, and I am dismayed how the status quo carries around Deaf people. Cochlear implants are the biggest financial dysfunctions that are hurting the vulnerability of Deaf community in the long run. The treatment of Deaf people is not the only, or even the most grossly neglected injustice flowing from mass of lies.

There are plenty of hate crime, hate speech and biases against Deaf people every day, largely invisible in the biased media that would guarantee stakeholders, ignorant minds, and deficit thinkers to make sure Deaf community shall be oppressed daily is held accountable. The genocide practice also treats Deaf people as forgotten citizens, and it is an injustice that needs to examine by the fact that the majority of oppression to wipe out the term of ‘Deaf’ for the pleasure of advantaged would make them feel safer.

Why is that? Why Equal Justice Under Law? How come Deaf people no longer equal for the roots of justice?

We need to resist against hate, xenophobia, and all forms of oppression against Christopher Columbus for what he has done to Indigenous people. We shall celebrate Indigenous People’s Day. 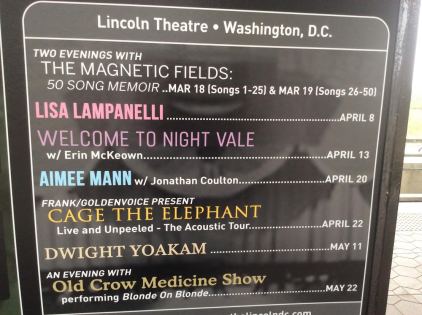 Look at the date and the namesake of the theatre.

April 8th. The theatre named after President Lincoln. It is the date when President Lincoln signed an important history to give Deaf people a new life to breathe for higher education by establishing National Deaf Mute College in 1864. I saw the sign when I was waiting for Metro train to come by and realized something about it.

Who might be Lisa Lampanelli? She is the Queen of hate-monger. She is a mean comedian on HBO and other TV series promoting hate speech. In 2007, she was in Rochester, New York for stand up show and made very hateful comments about Deaf people. I mean, really hateful.

Lampanelli: “Don’t you think Deaf students could be maybe just retarded, and they’re trying to sneak by saying they’re Deaf?” Oh, there are many more what she said about Deaf people. Where is the humor in these statements? In what way are these acceptable? NONE. NADA. ZERO.

For Deaf people in Washington, DC, the home of Gallaudet University, the world’s only university for Deaf—they have been as an agent of change, and in many respects, an awakening in politics and Deaf culture. Deaf people are still reminded that that they are collectively still in pursuit of happiness, freedom, justice and equality in the land of America.

Lisa’s words supported mob attacks, medical genocide, cultural genocide, discrimination, hate speech, culture of fear and most importantly, Audism. How would Deaf people feel if the hearing peers approve a show of a hearing person mocking and degrading them? What kind of message is that sent to the Deaf people and their families who struggle discrimination and prejudice on a daily basis? What about the self-esteem of those Deaf people who already demoralized by the extensive Audism?

To add the salt on the wound, their money via public and private activity fees might finance the show. Lampanelli can practice her hate speech/literature elsewhere, but to do this in Washington, D.C.; with the major Deaf university sends a very negative message on the value of Deaf people and students. There is no going around this message.

Lampanelli still have not apologized for her hate speech ten years ago. She cannot get away with it. We need to remind her that it is not acceptable. Stop hate speech against Deaf people. I feel those Deaf people in 2007. I cannot imagine and I do not think it was funny at all.

No wonder where Trump got this from Lisa for calling Deaf people retarded.

April 8th is very special for Deaf people with the BIG help of President Lincoln. Bless his soul! Lisa Lampanelli knew that it was an act of hate against Deaf people, as well as an attack on them as the state of being Deaf.

I think that Lincoln Theatre needs to realize and have the show cancelled and respect Deaf people first. I wish Deaf people would protest there and make a difference.

Since today is Columbus Day and we both know that it is a central holiday in the American folklore celebrating the conquest and plunder of the Native American people. Christopher Columbus is America’s first RACIST.

Genocide. Colonialism. Exploitation. I would rather celebrate indigenous resistance. I would rather to shed a different light to honor the Native people that have been survivors of colonialism and genocide. It was founded with the institution of slavery as part of the governmental apparatus along with the provision made for it in the U.S. Constitution.

Also, I must honor those people who fought bravely against the theft of their lands and displacement from their homes by the United States government. Today’s struggle for justice cannot be waged without remembering the true history of our nations conquest over the Native American people.

Their lives has been become part of contemporary indictment of the social condition of poverty faced by these Native American men, women, and children, and the repercussions that affect and break down the social roles of the family. We see disaffected youth, drinking, hunger, alcoholism, poverty, and children left to fend for themselves.

I was thrilled to read an article last week that in state of Washington, the council in Seattle has decided to remove Columbus Day and celebrate Indigenous People’s Day. That was a huge deal! Thank you! I was very happy to see that happening! In fact, I support Indigenous People’ Day very much for few reasons. 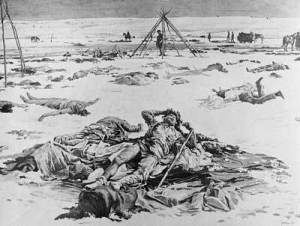 Also, there was a recent article written by David M. Perry called What to tell your kid about Christopher Columbus with the link below for the readers to click and read. I remember reading about Columbus way back in grade school and I never felt right about this guy and I followed my guts all the way today. My teachers were the assholes that taught me bullshit history when I was in classrooms that were supposed to be safe haven. White people are always good…. yeah, right!

Christopher Columbus was the one who infected America to be the king of Racism in the world. Why not National Association of the Deaf (NAD) celebrates Indigenous People’s Day today? Since NAD is the “nation’s premier civil rights organization of, by, and for deaf and hard of hearing individuals in the United States of America” quoted on the website.