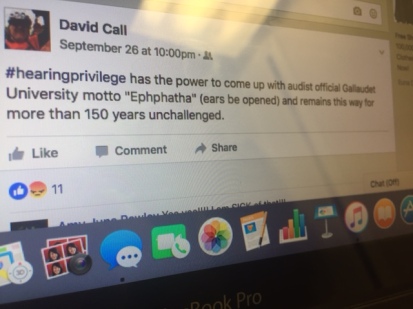 I need to set the record straight. There are not honest people in Deaf community anymore—which is sad. Yes, I have been giving away too many “credit” to other people because I love Deaf community and believe in helping other Deaf people and that is who I am. I have been a scholar winning awards more than people can really think who I am despite that I am a Deaf returned citizen and they would not give me a credit—very lame. It is all about one sided salacious stories without showing both sides of the issue many times.

Have those people lost the ability to learn not to judge Deaf returning citizens while maintaining a culture of civility and respect? Incivility and disrespect seem to have only increased, threatening the very nature of democracy. In the most recent example of not giving me the credit that I was the one who wrote countless blogs and did a lot of homework on my own about EPHPHATHA—the seal on Gallaudet’s emblem.

I also need to set the record that the late Carl Schroeder asked me to do research about EPHPHATHA on my own and I thank him for believing in me. He was THE ONE who told me about it—how did it happen? Well, I was auditioning for Deafhood Monologues that time and saw a seal on the podium right there and took the picture and went home and did a lot of research—then that was where I became very motivated to write about it. The Deaf artist, David Call did not know anything about EPHPHATHA until I mentioned to him. I will be more than happy to take pictures of all the e-mails between me and David Call. No problem!

Then there was one of the first red flags that David Call refused to credit me—only Charles Katz—his ghostwriting buddy when he was the “one” who corrected the spelling of EPHPHATHA. It was all about himself. Then I had to straight it out with him and asked him why he was not telling the truth in the first place. The first picture below:

Then he “apologized”—which I had forgiven him with e-mail below then he made a linocut print about EPHPHATHA which I purchased it from him. On Oct 25, 2013, at 7:00 PM, davcall@aol.com wrote:

Hi,
I wasnt pay attention to what you were trying to tell me that the word was spelled wrong until another person, Charles Katz, in FB told me that it was spelled wrong. That is when I realized oh! that is what you was trying to tell me. Other person who told me about spelling error is also a scholar like you. I guess it takes two scholars to make me realize my spelling error!  Both of you caught my spelling error before I carve the linocut. Thanks for saving me countless hours of wasted linocut carving!

Also, I need to make it clear that I am tired of being the “BAD PERSON” here and get blamed for everything.

David Call made a linocut print for President Roberta “Bobbi” Cordano that showed EPHPHATHA in there with the ladder breaking into the floor and gave her a gift when she was in Bay area. Now the print is hanging in her office. Just WOW!!!!! He would not have done it without my countless knowledge. I feel very foolish than anything right now. I was shocked that night. 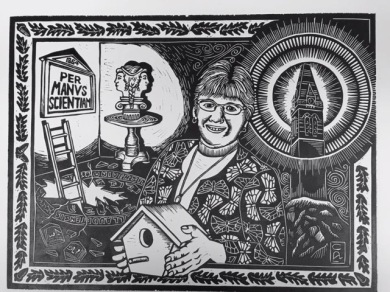